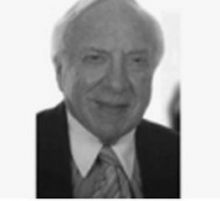 Often, while resuming past days, with joy and respect I do remember late Mr. Kalman Samuels, a distinguished lawyer and Honorary Consul of Yugoslavia and Serbia in Canada. Having had a privilege of working with him in the best interest of Serbia and its citizens in Canada, during the period of 2006. and 2007, added great value to my personal and professional life. Several times we discussed turbulent global situation and its prospects. Never had we neglected the tragic genocidal history of The Independent State of Croatia that had exterminated hundreds of thousands of Serbian civilians and decreased number of Jewish in Croatia from 40.000 to 10.000 /S.Goldstein/.

Often , with pleasure, I do recollect a lecture Mr Samuels and Mrs Stella Samuels organized at the Temple Emanu-El-Beth-Sholom Congregation / Montreal/ at the beginning of March 2007. As a Charge D` Affaires of the Embassy of Serbia in Ottawa I delivered a 40 minutes lecture about precious historical bonds, traditional cultural exchange, positive acculturation impacts, as well as of fruitful economic collaboration between Serbians and Jewish people/ Israel/.

Never before had I had such an attentive audience, mostly consisting of Jewish people of East European descent excellently acquainted with WWII history.

At the end of the event, a gentleman approached me and asked:

– Why doesn`t Serbian Government speak louder about the atrocities committed by Croatian ustashas on about a million of Serbian and Jewish civilians in the former Independent State of Croatia/1941-1945./ Why fabricated  history about dozens ofCroatian ISC concentration and extermination camps, even camps for Serbian and Jewish children abducted from their mothers, are not being averted by Serbian officials and scientists?

A lady beside him added:

– My relatives still live in Croatia. They are deeply worried about the present political situation reflected on all walks of life.

Fully aware of the subtleness and vulnerability of all sides regarding the issue my answer was completely sincere:

-The Government of Serbia /2007./ via its relevant institutions , Museum of victims of Genocide in Belgrade, Institute for Contemporary History, Ministry of Culture and Information is doing its best to investigate, publish and inform about genocide and crimes committed to Serbians, Jews and Roma in the Independent State of Croatia. We cannot compete biased international media advocating interests of great powers. But we do rely upon victims, survivors, and members of their families to publicly support the truth. I am ready to provide the library of your Temple with some of the books and documentary films about the issue.

Mr Samuels added that in a few months we could further discuss it.

There was no opportunity for further discussion as, unexpectedly, I had to return to Belgrade.

Global electronic media, ventriloquists of their governments, have not changed their biased approach in reporting the news.

The problem of permanent violence, genocide and ethnocide on Serbian population in the last 100 years in Croatia and BiH still lingers on. Permanently questioned, mocked or minimized in Croatian media and press, it is also passionately denied from highest Roman Catholic clergy and Croatian state officials/2/. Such an atmosphere creates no constructive nor viable solutions for decent coexistence of Serbian minority in Croatia and in Europe. Even more so, by averting its attention and not implementing fundamental rights inscribed in its own European Convention on Human Rights/3/, EU is indirectly supporting revival of Ustasha followers and Nazism in Croatia.

In my opinion Serbian government has not yet indulged thoroughly and systematically in resolving this problem. ”Words,words,words.. ”Master Willy would say.

And that could be an answer to a question raised in The Temple Emanu El Beth Sholom in 2007.

I am positively sure that Mr Kalman Samuels, had he been alive, would have approved of these efforts.

To my Jewish friends in Montreal I am going to forward photos from commemoration for 38.000 Serbs and 2000 of Jewish people at the Mount of Velebit in front of the Sharan pit and some photos from commemoration held at the Isle of Pag/Croatia/ on the spot of ustashi extermination camp. About 7000 Serbs and 1000 Jews, were bestially tortured, butchered and drowned in the blue grave/ Adriatic Sea/ at Slana and Metajna/prison for women and children/4//4a/.

Seven decades after WWII there is no single monument remembering innocent victims on Pag. A marble plaque posted in 1975. was mattocked by  Croatian ustashi followers in  1991. ,2010., and 2013http:/5//5a/ 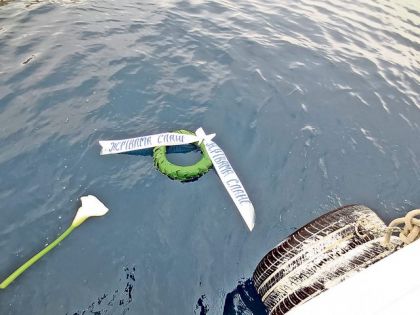 Laying a wreath at the Pag Channel

The best human response would be that citizens of the Isle of Pag and the Government of Croatia soon, by themselves, pay their respect to Serbian and Jewish innocent victims by posting and taking care of a new commemorative plaque.

Mutual understanding and respect has always been the only answer. 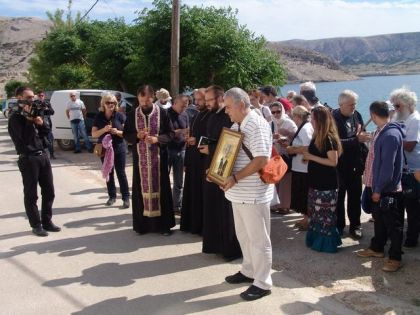 Metajna/Croatia/ 20th June 2015./ – Commemoration of the members of Jadovno Association in front of the school that served as a prison for Jewish and Serbian mothers and children.