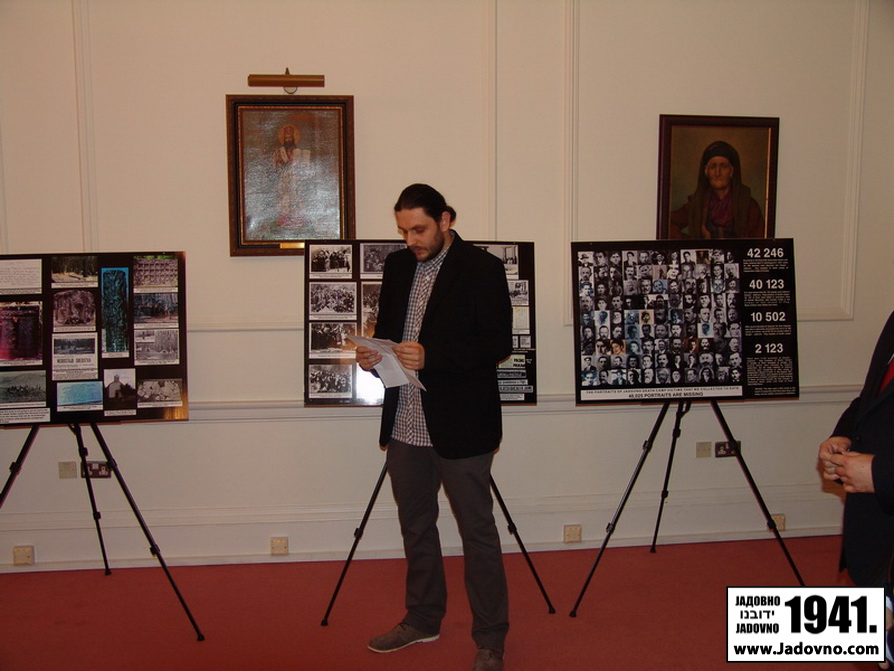 Visualization of historical processes and phenomena embodied in the complex of death camps of the Independent State of Croatia, Gospić-Jadovno-Pag, is the attempt to comprehend that which is very difficult to explain and define in an objective and simple way. Aesthetic, methodological, historical, as well as memorialization characterization of any place of suffering and the suffering itself, places before the author a series of dilemmas, difficulties and challenges. Aware of their human, moral and scientific responsibility, first and foremost towards the victims, researchers and authors are trying to paint an objective picture of explicit historical processes and events, with strong metaphysical and essential gravity, and to introduce them into the cause and effect context of time and space

While observing basic facts relating to Jadovno, we are going to note all determinable elements and recognizable execution points of the terrible crime of genocide over Jews, Serbs and Roma. Observing the crime of all crimes in the historical context, shows us that the dehumanization of the victims reflects turbulent historical processes with its roots reaching as far as several centuries in the past and which last for a long time after the crime. All characteristics of this terrible, systematic, planned and organized crime executed over a large area, with a large number of participants and observes, “hidden” and theoretically and abstractly named with different terms, explicitly explode in the look of a butchered child’s eyes or in the last message written by the shaking hand of a victim who writes the last goodbye to the loved ones.

While facing with the name, personal and family story and with the national, but also human tragedy in general, and while transferring the suffering in our own system of collective and individual knowledge about the crime, all of us together convey the message on the value of life which is the best and only essential bearer of the culture of memory and remembrance. Our duty is to remember, but the duty of all of us is also to testify so that this terrible crime would not happen again, just as much as it is our duty to live, in order to render death senseless. This first exhibition on the complex of death camps, as an exhibition form in general, is limited by a series of factors, but it will succeed completely if we, in our conscience, carry from this place tonight a look in the victim’s eyes or message: “Never again”!

The international importance of the complex of death camps Gospić-Jadovno-Pag, the context of studying the Holocaust and the Genocide over Serbs and Roma, in the Independent State of Croatia with its specifics and characteristics, and factography that we can see at the exhibition, commits us to dedicate days like this one to the truth.

Unfortunately, the truth does not always easily come to the light of day. Painful images of this truth show us that the ideological context of genocide causes a series of other historical processes that we see even today.

The Serbian people, especially those from Croatia, know it the best and felt on their own skin during the cruel wars in the nineties, that, along with ethnicity and religion, the memory of the victim was also life-threatening for individuals and groups.

The denial of Holocaust and Genocide is a part of the crime that we see even today. This denial makes us painfully face the reality and warns us that prevention of such phenomena must be something we insist on. We are committed to this, besides by our duty as descendants and supporters of the victims, also by the fact that this system of death camps was the predecessor of Jasenovac, or Balkan Auschwitz as some call it.

The story of the continuity of bestiality of Jadovno and Jasenovac gives us contours of a system of values based on destruction and denial of the others and the different, and as such these places represent one of the biggest stains on the history of mankind. The memory of these and, unfortunately, many other places is the best obstacle to the rehabilitation of the ideology that resulted in the horrific crime.

I think it wold be best to let these photographs and other first grade historical sources speak for themselves, because as much as we try to describe the magnitude of suffering in this complex of death camps or the essence of suffering in the Holocaust and other Genocides, the victims are going to do this in the best possible way with their life stories.

Those life stories, messages and looks from these boards commit us to develop positive values of the human society, but also put us in a position of responsible conveyers of a painful historical experience to the generations that come after us.