The two books were presented to the public of the town of Glina, Croatia on June 26, 2010: „Jadovno, Complex of Ustasha Concentration camps in1941“, by Djuro Zatezalo, and „Jadovno-Collection of documents“, edited and published by the Genocide Museum of Kragujevac. This event was organized by common action of Serbian Cultural Society „Prosvjeta“, and Serbian National Minority Council of Glina town in Croatia.

The
main speakers on Zatezalo’s book were Vesna Čulinović-Konstantinović – president of the Alliance of antifascist fighters and antifascists of Croatia (SABAH), Svetozar Livada – sociologist, and the author himself.

Zatezalo, who worked as director of Historical Archives of Karlovac for 30 years, got a task in 1965 from the Institute for Working-class movement history, led at the time by Franjo Tudjman, to research how many people have been killed in Ustasha concentration camp Jadovno. The task appeared to be hard and Zatezalo continued his researches until early 1992, but neither Croatian authorities nor Tudjman have ever shown any interest in publishing the results of his researches, so the book waited last year to be published, but yet not in Croatia. Zatezalo emphasized that during the 132 days that the operation of Jadovno camp lasted, 42,225 of people were transferred into camp, and 40,123 of them were killed. He succeeded to collect personal names and data of 10,865 of the victims. Among the killed people 38,010 were Serbs, 1,999 Jews, 88 Croats, 11 Slovenes, 9 Moslims, 2 Czechs, 1 Russian, 1 Roma and 1 Montenegrin.

President of Croatian Antifascist Alliance, Vesna Čulinović-Konstantinović said that inmates of this concentration camp were not killed in revenge, but because they were different from their murderers by faith, nation and political inclinations.

Livada talked about Zatezalo’s 30 years of work, resulting in his 17 books on WWII in Independent State of Croatia and crimes Ustahe committed there.

This presentation was attended by about 60 people.” 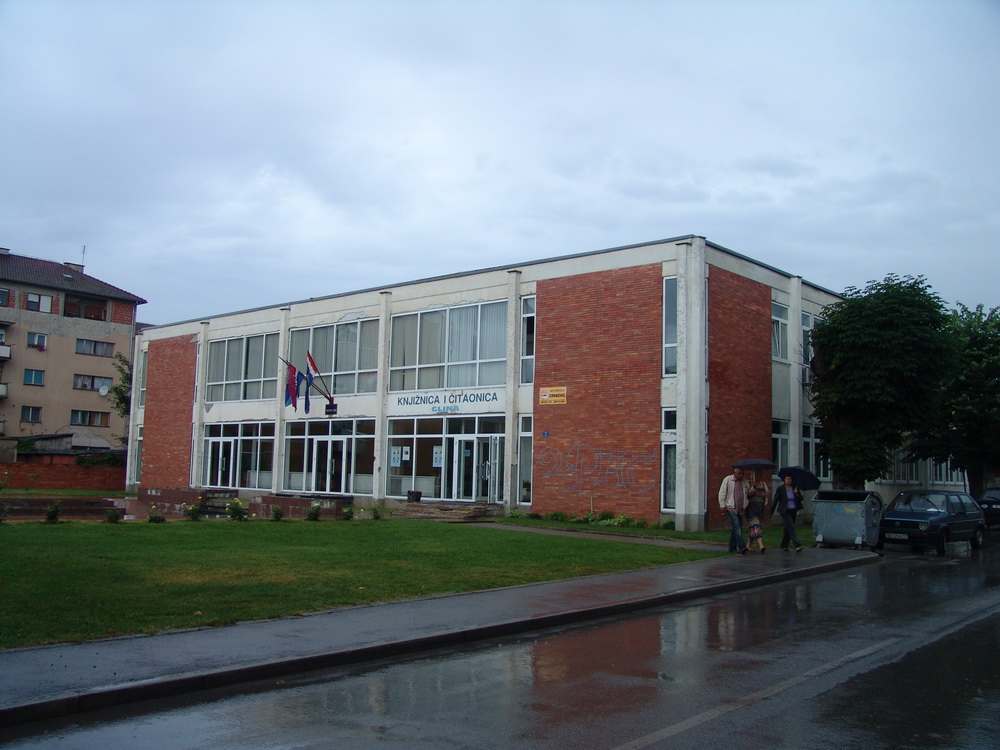 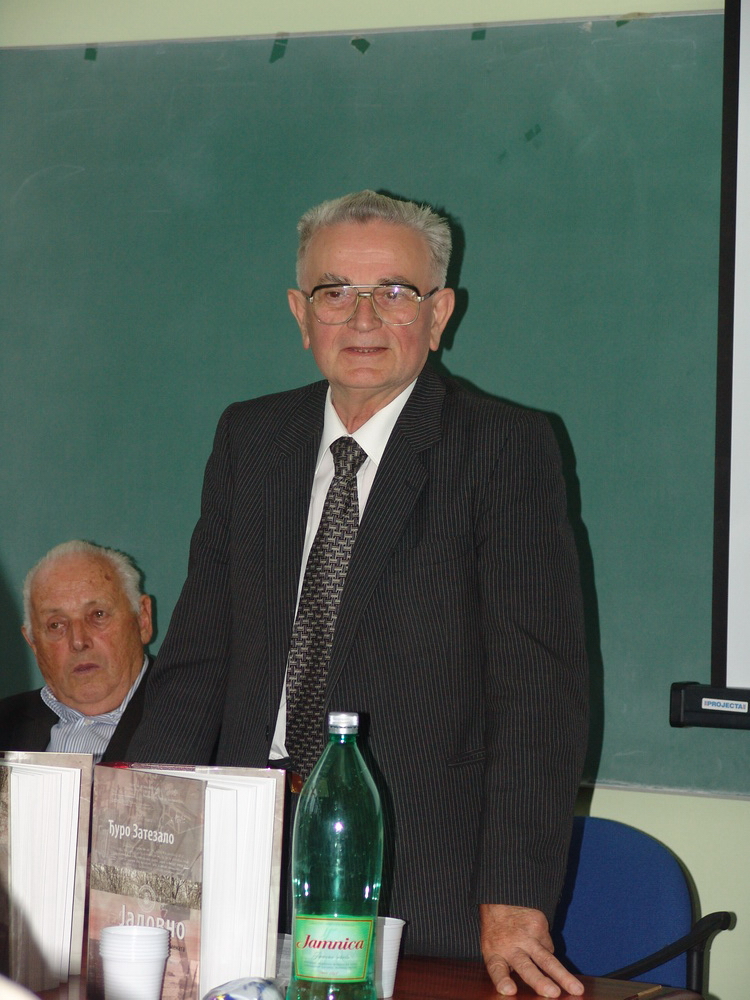 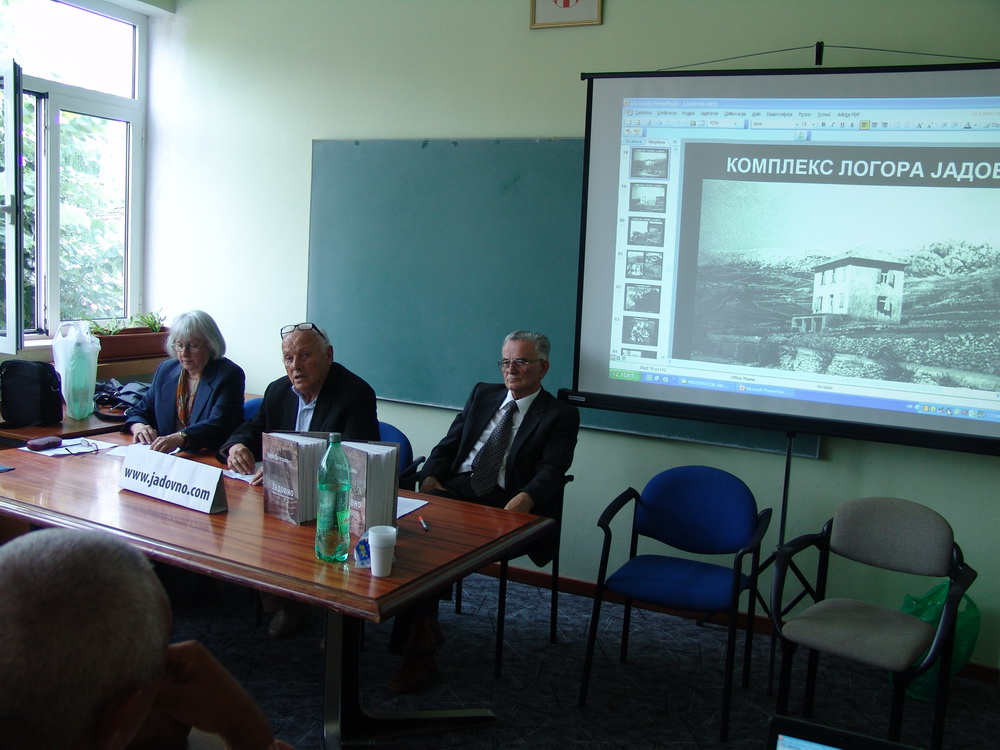 I did not notice a single journalist there. The photo-cameras were not heard, and although I am not a journalist I consider it would make sense to transfer this brief information published above.

Hopefully, professional journalists will forgive me for I am going to continue.

I came to the presentation to give my respect to a dear man and author dr Djuro Zatezalo, because without his many decades lasting work related to Jadovno as well as without his deep commitment to this topic, it almost would not make any sense to organize the Association “Jadovno 1941.” A factography and a truth contained in his two- volume work are the very foundation for further efforts aimed to collect more documents, add the names on the list of victims, synthesize the truth, and build a dignified relationship toward victims and their descendants.

A book presentation was held in Croatian Home. My first thought was that in Croatian Home it could not be appropriate to present the book about victims whose murderers greeted each other with: “For Home (Croatian) Ready!”

But, this is a small town and perhaps there is no other hall, but this one which we entered after passing a number of offices of a variety of associations (udruga) that emerged from, as they call it, “Homeland “war.

During the presentation, the author, visibly shaken, mentioned that this building bore the name Memory Chamber till 1995, and was built in 1968 on the same place where the Serbian Orthodox Church of Holy Mother of God stood until 1941.

Then I realized that we are in the very place of the painful Glina Serbian Orthodox Church, where in early August of 1941 the Serbs were brought in (misled by the promise of life-saving conversion into Catholicism) and then slaughtered, the men from County Vrginmost. According to one research, the number of victims amounted 1,291 person plus 45 victims from County Glina. The only man that survived this mass- crime was Ljuban Jednak, now deceased. Soon after the massacre, the church was destroyed.

All these victims were transferred to Serbian Orthodox Christian graveyard in Glina in 1947, where for the occasion of 10th anniversary of the massacre a common Memorial Crypt marked by a memorial plate was built on July 27, 1951. Every year on May 13, in Serbian Orthodox Christians’ graveyard in Glina, a religious memorial sermon for all victims of Ustasha crimes in Glina in1941 is held.

During his stay in Glina, at his pilgrimage from “Kosovo to Jadovno” in 1983, Archbishop Athanasius wrote:

“At the place where the old church was, in the very center of Glina town, today stands „Memory-home”, home of culture and entertainment, with a swimming pool in the front and a memory-plaque /toward the street/, where it reads this testimony, worth to be remembered: „The truth has been inscribed by our blood. Once, in this place stood an Serbian Orthodox Church, and on July 30, 1941 about 1, 200 innocent people meet there death by the blade of Ustasha knives. Against evil and crime, people of Banija rose and went on the heavy but bright paths of People liberation fight (NOB). Today in this place stands the Memory-home of the victims of fascism, and it was built in the year 1969 by united action and brotherly solidarity of the people of Banija and the people across our socialist homeland.July 4, 1969.”

The old church originated from 18 century, was built in Austro-Hungarian baroque style, since ultra-Catholic Monarchy could not bear or allow Orthodox Serbian-Byzantine style. /Let it be mentioned here, if it is of any importance, that in old Orthodox church in Glina, Anno Domini 1846,was for the first time performed „Our beautiful homeland” written by Antun Mihanovich, and a Serb from Glina town, Josip Runjanin composed the music for it in the same year, and Serbian Orthodox Church Choir from Glina sang it. But, then the times and customs changed/.”

I looked then at the audience seeking clergy persons. Priest of Glina and priest of Kostajnica-Dubica, Slobodan and Nikola, all with dignity and calmness, followed the talks in this devil’s mansion built at such a sacred place.

They know that here in this holy place priest Bogdan Opachich, pastor and Serbian Archbishops’ deputy in Glina was tortured, slaughtered, and then thrown into the pit in Prekope,.

Some speakers again put things that could not be equated on the same level. With my deep respect for each of the victims, it must be said that among 40,123 killed people, 38,010 were Orthodox Serbs.

Some speakers again compared incomparable things. The first fighters against occupants and Ustashe in 1941 could not be equated with Ustasha evil-doers!

The same people that once put the five-pointed star instead of the cross on those two or three memorial-plates imposed to the families of Serbs killed in Jadovno, are today elected honorary presidents publicly announcing that they won in 1941as well as in 1945. Such declarative „antifascists” have no moral right to speak about martyrs of Jadovno, and we, descendants of these martyrs are prevented with our dignity and Saint-Sava vow of respecting them.

It was also said that Ustasha monsters were a mistake of nature.

God is Nature, and God makes no mistakes, but he gave us the freedom to choose whether we will live like beasts, and whether we will treat our close people as animals or will we choose the Christian path.

Those who killed masses of our family members in the most monstrous ways were not mistakes of nature, but followers of the sect (as in their deeds Christian faith does not exist at all) and murderers empowered by the state that planned and legalized the crimes. 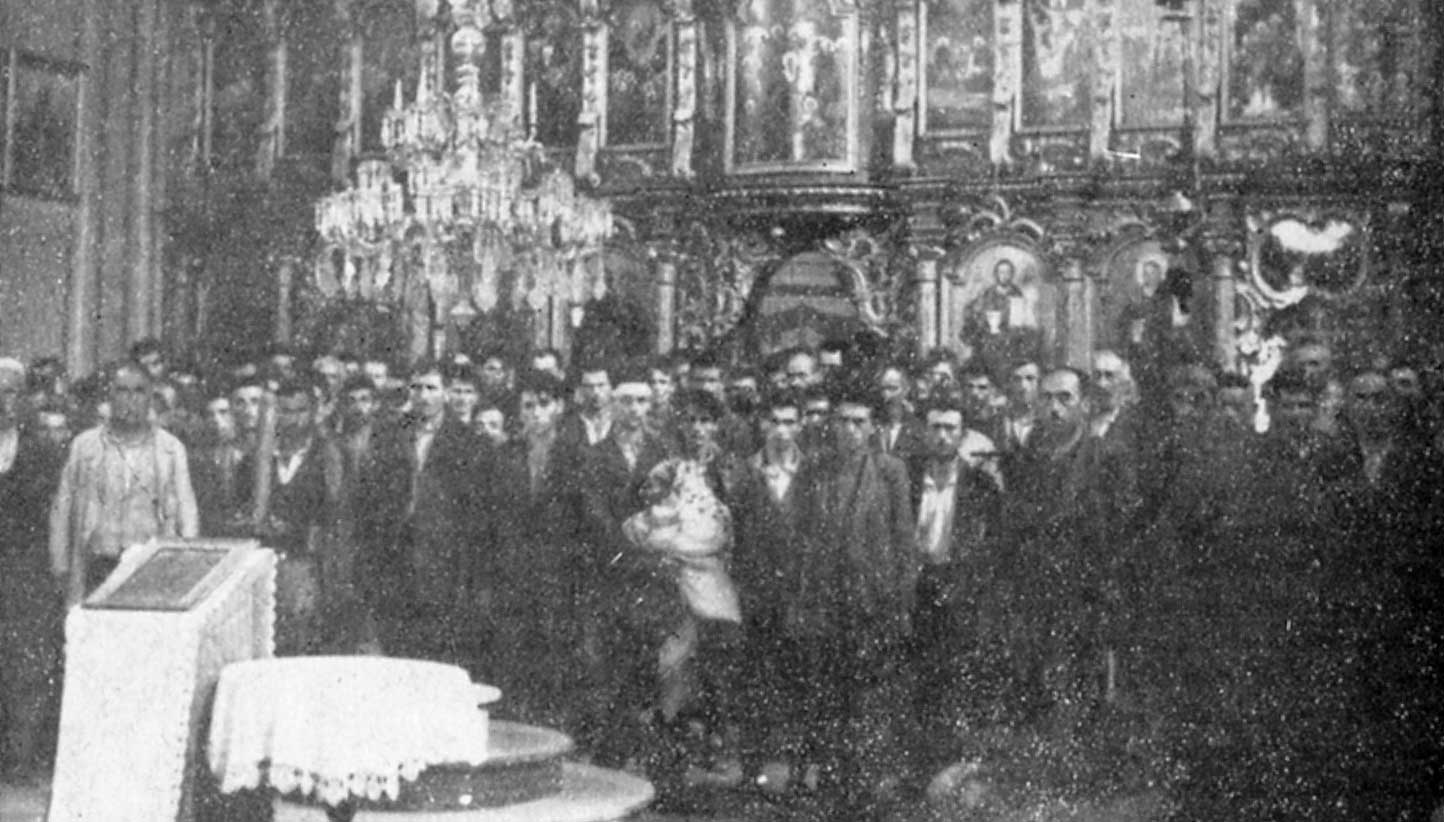 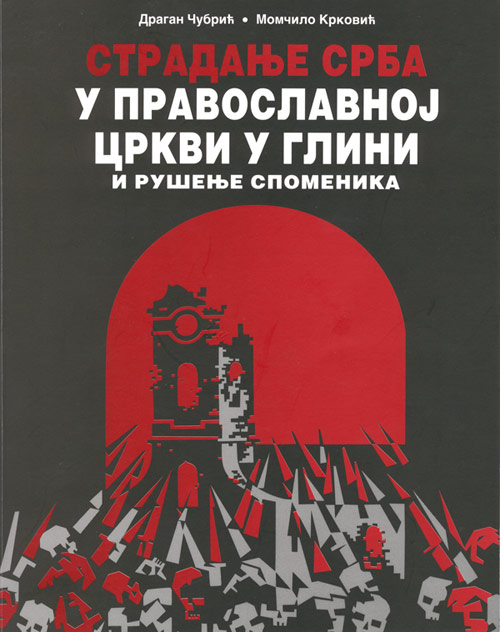 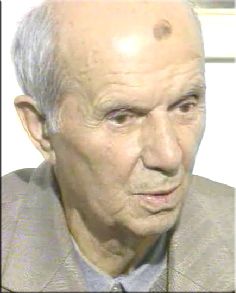 At the book presentation it was said again that the Jadovno truth was not distorted or even hidden. Well, our grand-mothers and mothers, insisting to see where their loved ones were killed, weren’t they brought to Sharanova Jama only, weren’t they told that this is “a pit Jadovno“?

Didn’t professor Ante Zemljar, after bringing the locals of Pag to lay wreaths at the site of the concentration camp Slana in ’47 and ’48 end up in Bare Island ( Goli otok) prison-camp?

And Branko Cetina, one of few who escaped the Jadovno concentration camp, then colonel, wasn’t he instantly retired, after he held a history-class to the families of Jadovno victims?

Concealment of the truth about Jadovno, disdain to the victims and humiliation of their descendants goes on continuously to this day.

If it were not so, the descendants of victims would not have to wander across the Velebit “Nature Park” searching for the very site of the concentration camp Jadovno, nor wander around the rocky desert of Slana Bay on Pag island, looking for the site where a memorial plate was once broken, and they would not have to search in vein in Metajna someone willing to show them the site of former women and children concentration camp.

If there was any respect for the victims, no bikes would chase between the pits of Jadovno and people wouldn’t swim, sunbath or dive in the very Memorial area of Slana.

At the end of the book presentation, Dr. Djuro Zatezalo invited attendees to come at the first event of “Jadovno Remembrance Day”, on June 26 this year. Association Jadovno 1941, Serbian national Council and the Jewish Community of Zagreb have done the same, as it was agreed earlier.

But, on the Internet pages of the Alliance of antifascists fighters and antifascists of Croatia (SABAH), nor in the June issue of Antifascists Voice (Glas antifasista), a word was not said about the upcoming gathering in Jadovno.

It is obvious that they stake at their attitude that Jadovno victims commemorations should be held on „round“ anniversaries, ’70, ’75, ’80….. At the ’85th anniversary the most of grand-children of Jadovno victims would not were alive any more.

Such a decision didn’t surprise me; it’s the matter of above mentioned continuity.

And, we will go to Jadovno, God willing, every year, even several times a year. As long as the pits full of bonds of our loved ones aren’t replaced with graves.

To our children and grand-children we will pass the truth about Jadovno, and we will mention our martyrs in our prayers.

After the book presentation ended, the three of us, guests from Banjaluka, went to the temple of Holy God Mather Birth, built in 1963, to say our prayers to God.

The beauty of this temple and the magnitude of the sufferings, Bishop Athanasius described as it reads:

“….were killed under the altar for the Cross of Lamb and the true Testimony. Because of it, in the new church of Glina a separate altar has been built for them, and the Serbian Church included them in its All Martyrs and New-Martyrs from Kosovo to present days. (Sabor Svetih Mučenika i Novomučenika, od Kosova do današnjeg dana). This altar is in the apse of north choir of the new church, and in the same apse above this altar there are figures painted in frescoes: Priest-Martyr Sava of Upper Karlovac diocese, archpriest Stevo Ogulinski, women martyrs Orthodox Christian Mothers and several other Children- martyrs and peasants of this area, wearing their own national costumes. Several times a year the special sermon is served for all these New Martyrs of Glina at this tiny altar. In the coffin at the altar cornerstone of old church is kept, with the handful of a soil saturated with the blood of Glina Martyrs and a particle of the relics of Saint Hieromartyr Lazar of Kosovo, which is a proof of common destiny of these New Martyrs and Old Martyrs of Kosovo. In life and in death they had all this in common: the same suffering for the faith and nation, the same love for the God and for the nation.”

No word should be added to this.

President of Association of Descendants and Supporters of Victims of Ustashian Concentration Camps in Jadovno 1941.