October 14, Belgrade, Serbia: When Nazi flag is protected by FIFA and the US passport

There was a football match between Serbia and Albania in Belgrade. The match was considered risky. But all was just peaceful, even though the Albanians have, with the help of NATO and USA, illegally stole Kosovo and Metohija, and cause troubles in other parts of Serbia as well. But the Serbs were tollerant. A general opinion was “Sport is to be played and enjoyed, so let the better one win.” 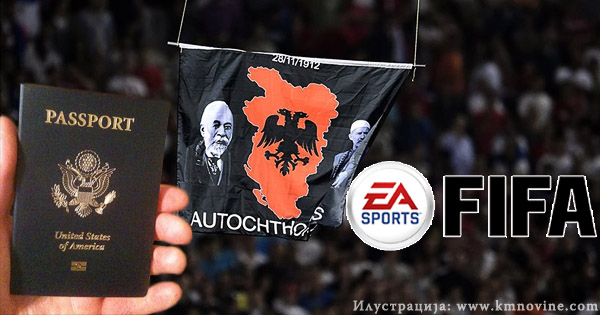 During the match, the Albanians have launced a drone carrying a flag. The atmosphere exploded, and the fight started on the terrain.
That’s how the mainstream media reports about the incident, and the world swallows it thinking: ” Oh, Serbs, always trouble with them.”
Let’s stop here and open your eyes.  Did you see the flag over the stadium?  Do you know how the Albanian flag looks like? Google it! Or see here:

ut whose was the flag the Albanians (not ordinary Albanians, but the Albanian PM’s brother!  Olsi Rama! ) launched last night in Belgrade, that provoked the reactions?

(Btw. the above mentioned Olsi Rama is an USA citizen, US passport holder, and George Soros employee. Google it!) Rama was released after one phone call from the US embassy, and he freely went back to Albania)
The flag they launched by drone was the one of the New, or The Greater Albania, notorious Nazi satelite state.
(see the video and the photo bellow) 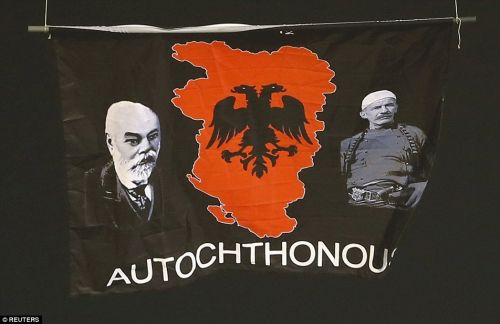 The Greater Albania was Hitler’s Nazi satelite state. Glorifying one NAZI state in Belgrade, in Serbia, where Nazis have murdered over 2 mil. Serbs, Jews and Gypsies , is a monstrous act per se.
Another tragedy occured the same day in October. Nazi Germany started one of the most brutal massacres in 20th century, in Kraljevo, where they executed 7 – 8000 Serbian civilians.
The killings started on October 14 – 15.
The same date, these Albanian indoctrinated monsters have come to Serbia waving the flag of their World War II Nazi state!
Coincidence? No. This  is beyond sickness.

Meet the Greater Albania, or Schqiperia  (no it’s not pejorative. that’s how Albanians call themselves. Google it, or see here for ex:  Wikipedia: Albania (/ælˈbeɪniə/, al-bay-nee-ə, or sometimes /ɔːlˈbeɪniə/, awl-bay-nee-ə; Albanian: Shqipëri/Shqipëria; Gheg Albanian:Shqipni/Shqipnia), officially known as the Republic of Albania (Albanian: Republika e Shqipërisë;) ,  probably a sole Nazi state whose flag is free to be raised and celebrated by Albanians and FIFA, Global Media.

The Greater Albania or ” New Albania” : On April 6, 1941, Nazi Germany and the axis powers invaded Yugoslavia, Operation Punishment, and Greece forcing the capitulation of Yugoslavia on the 17th, and Greece on the 23rd. Yugoslavia was subsequently occupied and dismembered. The Axis powers established a greater Albania or greater Shqiperia at the expense of Serbia and Montenegro. Territory from Montenegro was annexed to Greater Albania. From Serbia, the Kosovo and Metohija were ceded to greater Albania, along with the western part of Southern Serbia (Juzna Srbija), now part of Macedonia, an area which was part of Stara Srbija (Ancient Old Serbia). This Kosovo-metohija region and the surrounding territory annexed to Greater Albania was called “New Albania”.

To create an ethnically pure Shqiptar Kosovo, which Albanian called “Kosova”, the Shqiptari (Albanians) launched a widescale campaigns of ethnic cleansing and genocide. Ethnic Serbs in the Kosovo-Metohija regions were massacred, and their homes were burned, and survivors were brutally driven out and expelled in policy of ethnic cleansing and genocide.

The Albanians from Kosovo in the 21st Waffen Gebirgs Division “Skanderbeg” committed war crimes and genocide against the Orthodox Serbian population of Kosovo. They planed and carried out crimes against humanity in Kosovo. Orthodox Serbians of Kosovo were the victims of ethnic cleansing and genocide. This genocide would contribute in the Shqiptar goal and policy to create an ethnically pure, Shqiptar Kosovo, in an attempt to create a greater Shqiperia or greater Albania.

Armed with material supplied by the Italians, the Albanians hurled themselves against helpless settlers in their homes and villages. According to the most reliable sources, the Albanian burned many Serbian settlements, killing some of the people and driving out others who escaped to the mountains. Other Serbian settlement are being attacked and the property of individuals and of communities is either being confiscated or destroyed. It is not possible to ascertain at the present time the exact number of victims of those atrocities, but it may be estimated that at least between 30.000 and 40.000 perished.

Bedri Pejani, the Muslim leader of the Albanian National committee, called for the extermination of Ortodox Serbian Cristians in Kosovo Metohija and for a union of a Greater Albania with Bosnia and Herzegovina and the Rashka (Sandzak) region of Serbia, into a Great Islamic state. The grand Mufti of Jerusalem, Haj Amin El Husseini was presented to Pejani a plan which he approved as a being in the interest of Islam.  As we see, that dream is very alive even today: 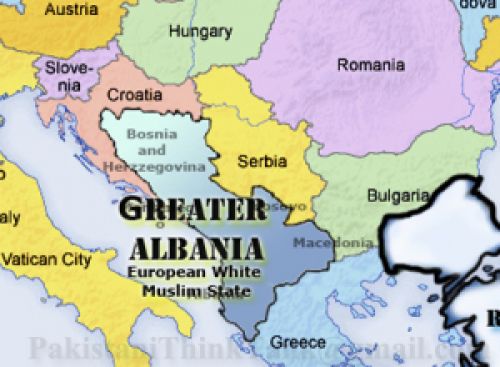 The Albanians in the Skanderbeg Division were mostly Muslims, of the Bektashi and Sunni sects of Islam. The division contained several hundred Albanian Catholics, followers of Jon Marko Joni.

Historian L.H. Stavrianos, in “The Balkan Since 1453″, described the genocide committed against Orthodox Serbs by the Shqiptar Skanderbeg Division in these terms:

Balkan Historian Robert Lee Wolff, in the “Balkans in Our time”, described the genocide committed against Kosovo Serbs by the Shqiptar 21st Waffen Gebirgs Division der SS Skenderbeg as follows:

“In the regions annexed by the Albanians, their so-called Skanderbeg division, made up of members of the Albanian minority in Yugoslavia, massacred Serbs with impunity.”

The Nuremberg War Crimes Tribunal declared the Shutzstaffel or SS criminal organization and every individual member of SS was found to Be a war criminal guilty of “planning and carrying out crimes against humanity”.

~ These days Serbs prepare for marking succesfull end of ‘Belgrade operation’ , that borught to an end 1287 days long German and Croatian occupation (the right side of the Sava bank, today Zemun, Novi Beograd became, by the will of Germany, parts of another Nazi statelite state, NDH – independent state of Croatia. The Independent state of Croatia was  described by many historians for some of the greatest crimes ever and the most horrible genocide occured there in Jasenovac death camp, Staro Sajmiste, Jadovno complex, and the only one and the first death camp for (Serbian) children in Sisak. ~

Glorifying one NAZI state in Belgrade, in Serbia, where Nazi Germans have murdered over 2 mil. Serbs, Jews and Gypsies , is a monstrous act per se.

Also, between 13 – 15 October, the Albanian patron, NAZI Germany started one of the most brutal massacres in 20th century, in Kraljevo,  they executed 7 – 8000 Serbian civilians
Photo: Beginning of the Wehrmacht’s massacres in Serbian Draginec and Kraljevo, October 13 – 15, 1941.
(murdered 7,700). 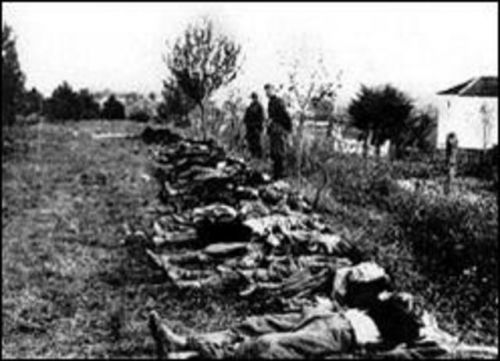 The killings started on October 14 – 15.
The same date, these provocateurs  have come to Serbia waving the flag of their World War II Nazi state!
Coincidence? I don’t think so.

It’s significant that the incident happened when whole of Serbia nad Belgrade as a capital, are  preparing  for two important memorials: visit of Russian president Vladimir Putin, on 16, and second but related,  marking the 70. anniversary of liberation of Belgrade from the Nazi German occupation.

Therefore, Serbian player Stefan Mitrovic is an antifascist hero, and his act of towing the Nazi flag down is  fight against Nazism and Fascism.

And if raising a NAZI flag is not enough strong reason to keep the Albanian teams out of competittions and international matches, that would be sad confirmation of certain rumors that FIFA has lost all morals and credibility.