YOU CAN’T HAVE YOUR RATINGS AND NAME YOUR VICTIMS, TOO

Both the victims and the killers have their names, but they also have roots and the reasons why they were what they were. The former were in pits, the latter were above the pits. 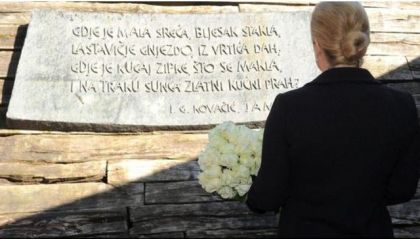 Croatian President Kolinda Grabar Kitarovic paid a visit to Jasenovac and paid her respects to the victims of the Ustasha Independent State of Croatia (NDH) without any media escort or state delegation, as if she were going on a private visit.

As a civilian, Kolinda Grabar Kitarovic surely has the right to go like that to the site of one of the worst crimes (crime of genocide) in this part of Europe.

But, as the president of Croatia, Ms Kitarovic had to do it (also) at the ceremonial, that is, official level.

This way, all victims bestially killed in that death camp have become some sort of political tokens in diplomatic and party games on Croatia’s public stage.

It is well-known, for example, that the Croatian right are constantly revising history when it comes to NDH crimes. The new Croatian president has recently thrown out the bust of Josip Broz Tito from Pantovcak (Croatian presidential palace), which was applauded by her voters.

If she had waited a few days, Ms Kitarovic would have been in Jasenovac together with her political rivals and heard speeches and numbers that are not least liked by the Croatian Democratic Union (HDZ) of Tomislav Karamarko nor those who are willing to give them their vote.

That is why Kolinda Grabar Kitarovic did her duty “in a peaceful and quiet manner,” like some Croatian media have reported, surprising even the Memorial Centre’s management.

In a pertinent text written on the occasion, after she laid the flowers, she stated a few humane and kind sentences, with a political undertone, of course, expressing a negative opinion about the NDH and the crimes committed under the regime.

What is striking is that Kitarovic did not mention which people were killed in Jasenovac and above all why. She simply translated the Serbs, Jews and Roma into – the people who lost their lives there.

However, genocide is not committed against an amorphous mass of “people” but against ethnic groups, which were outlawed, by name, by the NDH.

Of course, nobody disputes that Ustashas also killed the people of other nationalities who stood up against such a regime.

But, being silent on historical facts about the eradication of entire populations for the sake of political and national “domestic peace” simply leaves an ugly impression and does not contribute to the solving of the long-lasting Serbian-Croatian dispute at all.

Both the victims and the killers have their names, but they also have roots and the reasons why they were what they were. The former were in pits, the latter were above the pits.

If she had had the strength to write that down, Kolinda Grabar Kitarovic could have been the president of the little remaining Serbs in Croatia (Serb minority, as they are called these days).

But, this was a half-hidden visit of a politician who wanted to carry out the duty as soon as possible and have as little talked and reported about it as possible.

You can’t have your ratings and name your victims, too.

Vladimir Umeljic: Comment on: JASENOVAC IS BEING USED FOR POLITICAL INTERESTS