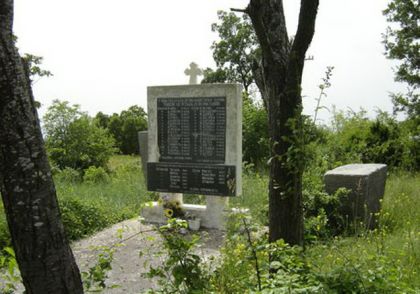 On this day in 1941, Ustashas burnt women and children alive in a stable in the village of Ljubljenica in Berkovici municipality. It was the orthodox holiday of the Nativity of the Virgin Mary.

Milenko Jahura, the head of the Serb Ethnic Society Prebilovci, says that on that horrible day, members of the Vukosav family – Cvijeta, Dara, Slavko, aged 15, Stoja, 10, Nasta, Cvija, Danica, Slavko, 8, and Andjelko, 8, were burnt to death.

The only one who managed to jump out of the burning fire and run away was nine-year-old Slavojka Vukosav.

Their Croat and Muslim neighbours forced them out of their homes, telling them they were ‘moving to Serbia’ and pushed them into the stable of the Gelo family, while beating them with bats.

“They locked them all up in there. The stable’s roof was made of straw and the criminals threw in some more straw. Outside the door stood the criminals carrying iron hay-forks. They used them to throw the burning humans who were jumping out of the fire back into the stable,” recounts Jahura.

One girl was raped first. Slavojka’s brother, who jumped out of the stable, was thrown back into the flames.

Spasenija Gelo survived the ordeal but soon after succumbed to her wounds.

The crime was committed by Ustashas, the victims’ neighbours. The act was carried out by Baldo Boskovic – Krakic, Smajo Rizvanovic, Stojan Maslac, Hasan Bajgoric aka Hodza, Bozo Papac and others.

Around the burning stable, the criminals cheered and shouted back at the martyrs’ cries, and on a nearby field Croat girls danced in a circle and sang.

“With song, dance and toasts they celebrated the crime they committed. Immediately after they divided their victims’ property the way they had previously agreed,” says Jahura.

The names of 44 village victims killed in the Second World War are today known; 23 of them carried the surname Gelo. They were totally wiped out and the family name died away.

Of the Vukosav family, 21 were killed. Grown up men from the village, 10 of them named Vukosav and Gelo, were killed on the eve of St Vitus Day, on June 27, 1941 in Scepan Krst and thrown into the Barov Do pit.

Ljubljenica is a tiny village in the historical district of Dubrave in lower Herzegovina. Until 1992, it was part of Stolac municipality, and today it is situated in Berkovici, Republika Srpska.