LITURGY SERVED IN THE CHURCH OF HOLY GREAT MARTYR GEORGE 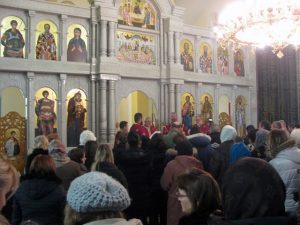 A Holy Liturgy was served in the Church of the Holy Great Martyr George in the Banjaluka community of Drakulic on the occasion of the 73rd anniversary of the Ustashe massacre of the Serbian residents of this community.

The Republika Srpska Minister of Labour and Veterans’ Affairs, Milenko Savanovic, said that this crime must never be forgotten and that Srpska’s institutions will give their full contribution to efforts to mark it.

“We all should be united and ready for certain things that can be repeated,” Savanovic said.

The president of the Republika Srpska Organisation of Families of Captured and Killed Soldiers and Missing Civilians, Nedeljko Mitrovic, noted that the fact that all residents of Drakulic, regardless of their age and gender, were killed, speaks that genocide was committed in that place.

“Those who politically and legally defined genocide should have come here since the pattern for qualifying crimes as genocide can be seen here,” Mitrovic said.

According to him, the intention to destroy the entire population of Drakulic is also seen from the fact that Croatian population was settled here.

“They failed, and we see today that Serbs were not destroyed here,” Mitrovic said.

He said that except for Croatian military officer for Banjaluka, Viktor Gutic, no one was brought to justice after WWII for this crime.

“I primarily here refer to organisers of this crime, the Ustashe chief Ante Pavelic and his associates, who fled this area under protection of world powers,” Mitrovic said.

He feels that the Assembly of the City of Banjaluka should bring a declaration or a resolution on this crime.

“Why should we behave humbly and masochistically when we see that in Croatia they ostensibly do not know what happened in Jasenovac, while we here have a little Jasenovac?” Mitrovic asked

He pointed to the need of precisely presenting the facts in the education system, but without inciting hatred, and announced a formation of an association of descendants of victims of the crime in Drakulic, which should assume an obligation to mark this crime in the future.

In the early morning of February 7, 1942, Croatian Ustashe, commanded by 1st Lt. Josip Mislov and father Vjekoslav Filipovic, committed a massacre of residents of the Banjaluka villages of Drakulic, Motike, Sargovac and Rakovacki Rudnik.

According to data collected so far, at least 2,300 people were massacred, including 551 children.