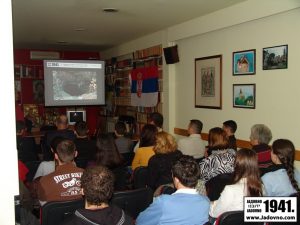 BANJA LUKA, 8 NOVEMBER /SRNA – SERBIAN NEWS AGENCY/ – The leadership of the former Independent state of Croatia (NDH) used karst pits as the most suitable places for mass liquidation of Serbs, Jews, Roma and ideological opponents of that monster-state, stated the President of the “Jadovno 1941” Association from Banja Luka Dušan Bastašić.

“Lika, Ličko Field, Velebit and the area around Velebit were chosen as the first liquidation centres of that monster-state, because they are full of karst pits, so not much ‘manual’ labour was needed for the liquidation of victims”, said Bastašić tonight in Banja Luka during the lecture on “Bottomless Pits of Lika and Velebit – the Places of our Suffering”.

Bastašić reminded us that the Serbs suffered during the NDH in similar pits in the Livanjsko Field and Herzegovina as well.

He said that it is very difficult to prove and investigate those crimes, just as the Ustasha criminals predicted.

“Unfortunately, so far we know of only few places out of countless karst pits, ravines and cracks where Serbs were murdered and where their earthly remains still lie”, stressed Bastašić.

St. Sava Youth Community of the Banja Luka Eparchy in cooperation with “Jadovno 1941″ Association and the Association of History Students “Dr Milan Vasić” is organising a series of lectures as a part of the Remembrance Month for Suffering of Serbs in 20th Century.