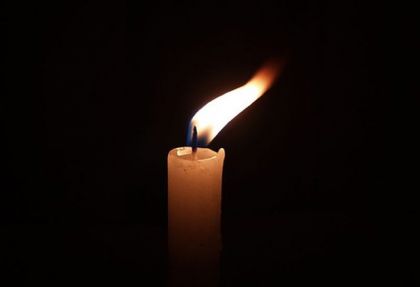 An hours drive into Croatia from the Serbian border along the A3 (E-70) motorway is a turning south to the village of Brocice. A few minutes drive beyond on the north bank of the river Sava is the site of the WWII Jasenovac concentration camp, burial ground, memorial and museum.

The camp was set up by the Ustasa led wartime Independant State of Croatia and was active between August 1941 – April 1945. The estimated number of people murdered at Jasenovac vary up to 700,000 with ethnic Jews, Serbs and Roma being  the main victims of horribly sadistic extermination methods.

Despite the fact that the Jasenovac victim numbers are comparable to some of the most horrific Nazi concentration camps of WWII the tragedy of Jasenovac has never received as high a profile as some of the German camps.

I recently heard of a beautifully simple new idea intended to improve public awareness of the Jasenovac holocaust.  A simple church candle will be offered to motorists crossing the border from Serbia to Croatia and the drivers will be invited to stop off at Jasenovac and light the candle for one of the camp’s victims. With the candle will be a note explaining the the history of the Jasenovac tragedy and a prayer and directions to Jasenovac.

I think the idea could be very effective, it is in it’s germination stage at the moment and offers of help and co-ordination would be much appreciated if people want to get in touch with Britic we will channel your interest to others prepared to be active on the project. I would suggest that the Serbian Orthodox church becomes involved and provides the candles whilst student groups from Serbia could provide the manpower at the border crossing on a shift basis.

I would anticipate that it would take a couple of years of daily effort to give out 700,000 candles but after the project is complete everyone of the victims would have been remembered with a prayer and a candle over 70 years after their deaths and as many drivers would have been involved with keeping the memory of their sacrifice alive.