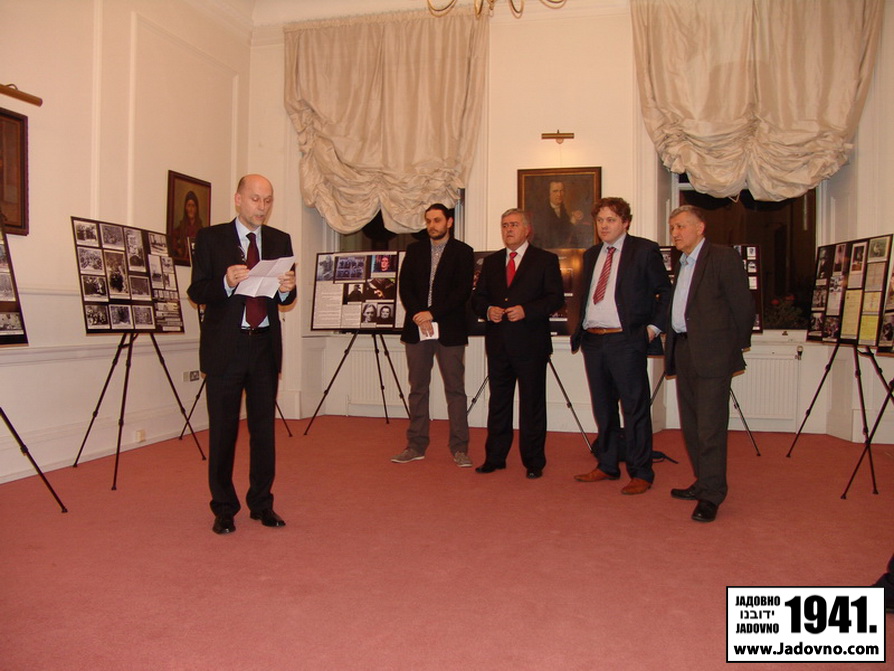 The NGO “Jadovno 1941” of Banja Luka together with the Embassy of the Republic of Serbia in London, organized this event to present the sufferings of victims of the complex of death camps Gospic – Jadovno – Pag, and the context of the Holocaust and Genocide in the Independent State of Croatia, to the members of Diplomatic Corps and the Serbian Diaspora, but also the Holocaust and genocide scholar community of Great Britain.

His Excellency the Ambassador of the Republic of Serbia in Great Britain, Mr. Ognjen Pribicevic, in his opening speech pointed out to a number of historical facts describing the phenomenon of the Holocaust, and stressed the importance of marking dates such as January 27th. His Excellency Ambassador Pribicevic reminded the audience that dealing with the past is an important basis of regional and international cooperation, as well as spreading the truth about the terrible crimes such as the one that occurred in the Gospic group of camps.

Dusan Bastašić, president of  the NGO “Jadovno 1941” of Banja Luka, presented the basic facts on the Gospic complex of death camps and the historical context of crimes of genocides committed in this region in 1941, pointing out that the entire society has a duty to  preserve the memory of the sacrifice of our ancestors.

The exhibition “My Jadovno” is only one of many projects implemented by our NGO in its Jadovno mission.  A constant, adequate and responsible work of our NGO “Jadovno1941”, expresses our intention to disclose the terrible details of crimes that cannot be forgotten – said Bastašić.

He expressed his special gratitude to the Jadovno NGO benefactors in London, Mr. Aleksandar Simic and members of his family, for their crucial help in organizing the “My Jadovno”exhibit in London and Leicester

International significance of the complex of death camps Gospic– Jadovno– Pag, the context of studying the  Jewish Holocaust and Genocide of Serbs and Roma committed in the Independent State of Croatia, with all its specificities and characteristics, as well as the factography that could be seen in this Exhibit obliges us exactly to dedicate to the truth days such as this one – said Mr. Predrag Lozo, Secretary of the NGO  “Jadovno 1941” at the opening of the Exhibit.

He pointed out that the truth is unfortunately not always easily coming to light, and painful pictures of such a truth show how ideological framework of genocide causes a range of other historical processes we are facing even today.

Serbian people, especially its part that lived in the territory of Croatia, felt it best on its own skin during the brutal wars of the nineties, when beside the national and religious affiliation,even keeping the memory of the victim, was life-threatening mark for an individual.

The special significance to the opening of the exhibition “My Jadovno” was given by the presence and address of the distinguished researcher and historian Rory Yeomans, who studiedthe genocidal past of the NDH for many years, especially its cultural and ideological foundations. Author of the book “Vision of Annihilation- Ustasha Regime and the Cultural Politics of Fascism 1941-1945” , Mr. Yeomans, stressed in his address the importance of the descendants’ engagement of to preserve the memory of the suffering of their ancestors.

The opening of the Exhibit “My Jadovno” in the Embassy of the Republic of Serbia in London attracted the attention of representatives of a number of diplomatic missions in London,Jewish organizations in the UK as well as people who are dealing professionally with the topic of the Holocaust and Genocide.

The representatives of the Serbian Orthodox Church in England and the Rabbinate of London honored with their presence the Exhibit that marked the International Holocaust Remembrance Day this year.

Among the attendees at the Jadovno evening in London was Mr. Risto Kovacevic, a Serb originating from Mostar. He has been living and working in London for more than twenty years. Mr. Kovacevic was named after his grandfather, a victim of the Jadovno death camp, whose portrait is part of the victims’ display of “My Jadovno” Exhibit.

The Exhibit „My Jadovno“, the touring testimony of its kind and the living memory of the victims of Genocide and the Holocaust, will be displayed in the Embassy of the Republic of Serbia in London for the next seven days.