Executions sites of Serbs and Jews are not place for entertainment 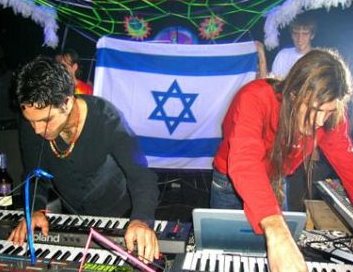 General Secretary of the “Margel Institute” from Zagreb Salamon Jazbec thinks it is unacceptable to have the twelve-day entertainment event “Summer Magic – Israel in Novalja” happening on the island of Pag, around the area of former Ustasha death camps Metajna and Slana.

Jazbec stresses that the really worrying fact is that this event is held without a commemoration service for over eight thousands of Jews and Serbs who died there because of the racial legislation and genocide policy of the criminal Independent State of Croatia (NDH).

Jazbec called onto the organisers of the event – the Israeli Embassy in Croatia and local authorities of Novalja – to include within this “performance” a visit to the locations of Ustasha death camps Slana and Metajna and pay respect to the victims.

“I invite the Israeli Ambassador in the Republic of Croatia to start an initiative during his visit to the Novalja municipality on the island of Pag to mark and protect appropriately the locations of Slana and Metajna as Memorial Areas of concentration camps from the time of Holocaust”, said Jazbec to Srna.

He reminded us that Metajna was the first death camp for women and children in the Second World War.

Jazbec is one of ten founders of the Croatian-Israeli Society and its first secretary, and co-founded of the “Margel Institute” in Zagreb, a Jewish organisation which deals with monitoring anti-Semitism, study of Holocaust, revealing and reporting Ustasha war criminals, and fight against historical revisionism.

President of the Union of Jewish Municipalities of Serbia Aleksandar Nećak said to Srna that he could not comment on the Pag event, because he did not have valid information, but in general, regardless of which victims are in question, the execution sites are holy sites and are not location to hold any events except commemorations.

Dušan Bastašić, the President of the Association “Jadovno 1941” from Banja Luka, sent a letter  to Israeli Ambassador in Zagreb Yosef Amrani in which he pointed out the historical facts relating to the island of Pag, as well as the consequences of years of concealment, relativizing and denying the crime that happened there in the summer of 1941.

“I would like to point out that on the island of Pag in the village of Metajna, the first concentration camp for women and children in the Second World War was established in June 1941. Most of imprisoned women and children were Jewish”, said Bastašić in the letter to which he did not get a reply.

“According to long years of research by historian Dr Đuro Zatezalo, no fewer than 8020 people were murdered in camps Slana and Metajna. Most of them were murdered on boats on the sea off the Slana Cape by tying rocks around their necks, cutting open their bellies and then throwing them overboard”, Bastašić said.

“When you travel by boat towards the famous beach Zrće, you must sail through waves of the Pag Channel where bodies of slaughtered inmates lie on the sea floor”, states Bastašić.

According to Bastašić, until a year ago, at the location of the Ustasha concentration camps on Pag, which are registered Second World War Memorial Sites, there was nothing that would indicate that an enormous crime had happened there in 1941, and unfortunately, there is nothing even today.

“The memorial plaque raised in 1975 by anti-fascists of Pag was destroyed in the last war, although there was no fighting on Pag. On the initiative of our association, the Memorial Plaque was renewed and its replica unveiled in the Sušac Bay on 26 June last year. The Mayor of Novalja had a series of objections to, according to him, unacceptable “rhetoric” in the text on the plaque. He also asked me to define a part of the text: “several thousands of victims…”, stresses Bastašić.

He added that nobody from the local or county authorities was present for the unveiling of the Memorial Plaque and that, two days after the unveiling and sanctification of the plaque, it was destroyed again. The perpetrators were never found, and the local community did not deem it necessary to renew the plaque.

“Someone clearly wants to continue hiding what cannot be hidden”, said Bastašić and said he was shocked that the performance in Novalja and the unveiling of an Israeli-Croatian friendship monument are happening on the location where a terrible crime happened 70 years ago.

In the letter he said that he was deeply convinced that the Israeli Ambassador had not known the facts that Jews and Serbs had been murdered en masse there when he had decided on the location and the time of the on-going event.

“It is very hypocritical not to inform the representatives of the Jewish community, who have a noble wish to organise the event, about the historical facts on the suffering of Jews in that area. I am at your disposal, if you wish, to present you much more information on camps Slana and Metajna, but also to be your guide around these sad places where both my grandfathers and an uncle lost their lives”, stated Bastašić in the letter to Israeli Ambassador.

Dr Dani Novak, a maths professor at the Ithaca College in the USA, who as a child survived the horrors of an Ustasha camp, also sent a letter to the Israeli Ambassador in Zagreb and pointed out that “there is a mistake in thinking that the Israeli tourism department and Israeli mission in Croatia support tourism on the island of Pag”.

“This has hurt many people and the mistake should be corrected. I am sure you are unaware of this situation. I asked to talk with somebody from the Embassy, but still did not get an answer”, stressed Novak, who has both Israeli and American citizenship.

He stressed that he wanted to talk with the Israeli Ambassador in Croatia and discuss possibilities of making progress in revealing the truth “regarding very sad events on Pag in 1941”.

Dani Novak said that his aunt and grandmother had been killed there in 1941.

“I believe there is a positive way to solve this very complicated situation”, added Novak in the letter.

The Israeli Ambassador in Zagreb also did not reply to Srna’s request to explain why for the location of the event, presenting a modern Israel, the island of Pag of all places was chosen, considering the crimes committed there over Jews.

A twelve-day festival “Israel in Novalja – Summer Magic” was opened in Novalja on 28 July, and it is going to present to the domestic and foreign tourists and the hosts the Israeli culture, music, art, gastronomy…

During the opening of the festival, a monument named the “Model of Israel” was unveiled. This monument is placed at the main town square and the event organisers say it is going to represent the “eternal memory” of this festival. 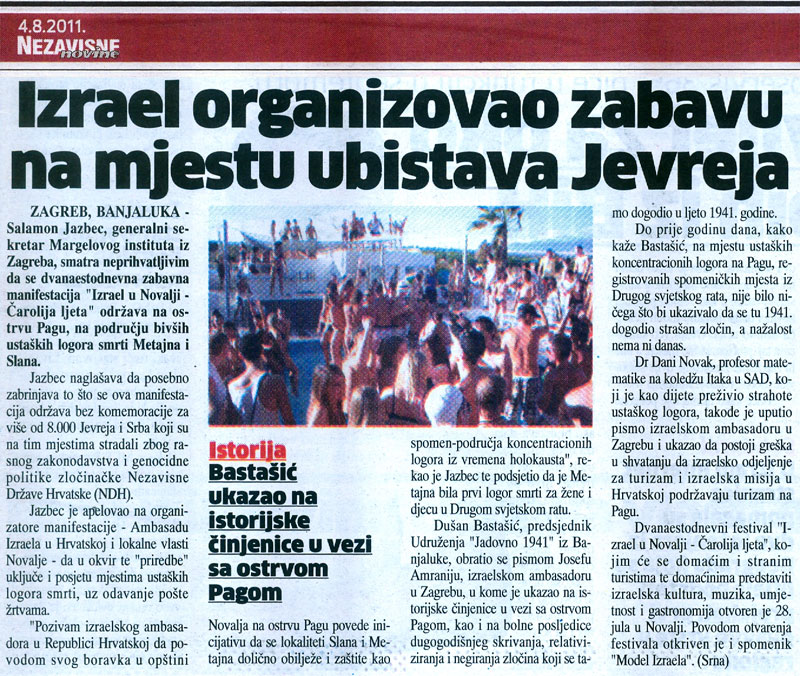