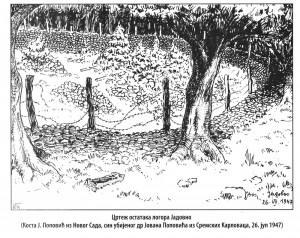 For all of you who have heard about it, and those of you who know more about Jadovno camp from 1941, this headline seems confusing.

To those who have never heard of Jadovno camp, this is yet another news item about some camp, and there are many types (scouts camp, work camp…) on some known or unknown location.

Many people know of Velebit in geographical terms. Some know it to be a nature park, an attractive destination for extreme sports, mountaineering, paragliding, spelunking and cycling.

Going to summer holidays on a path of death

Many people went over Velebit on their way to summer holidays, not knowing about Jadovno, drove through sharp bends, stopped on the top of the mountain to stretch their legs, eat a sandwich and take a picture from a spot with a view of the Adriatic Sea, the Velebit Channel and the island of Pag. Many of them had their photos taken with a smile, so that they would have it as a memory from the holiday.

Even in summer this place is cold, wind is always blowing, so travelers don’t stay long. Almost nobody notices that birds don’t sing there.

Most of the people who know something about Jadovno identify it with the Jadovno pit, how the Šaranova pit is called, which they have never visited.

We should not hold that against them, since there aren’t many waymarks to lead you there, and not many people will tell you how to get there even if you ask.

Almost nobody knows that from the town of Gospić, travelling towards and across Velebit and arriving to Karlobag and over the Velebit Channel to island Pag, they are passing by a complex of Ustasha Jadovno camps from 1941.

I don’t want to tire you with the description of the entire complex, but if you would like to know more visit: https://www.jadovno.com/jadovno-slana-metajna.html

Some wider description is inappropriate for this exclusive news.

Jadovno was a complex of Ustasha camps

Going through the town of Gospić, on the left side you see the building of the former penitentiary (Geriht) where a part of the arrestees were brought in. Not far from there is a the railway station to which in summer of 1941 arrived freight trains filled with hungry and anguished men, women and children. Many of them died during the journey and got thrown out of cars.

There in the station was a collection point for people brought in surrounded by wire, and not far from there were Maksimovića Stables (Ovčara) where Ustasha kept prisoners (mostly women and children) for several days.

From these locations the tortured people were taken on foot or by trucks to carefully chosen execution sites.

Some of those who were sent to Jadovno camp, which was located in the forests of Velebit northwest from Gospić would ask the local people: “How much farther to this town Jadovno?”

Many of them did not make it to their destination, killed or thrown alive along the way in the Šaranova Pit or but farther in the pit under the Grgin Hill. Those who arrived alive in the camp did not stay there long. It was never planned for them to stay. There was no room since new groupa of people would arrive every day. They were killed in countless karst bottomless pits all over Velebit, the nature park.

Today, between the pits there is the Jadovno Cycling Track, which is very “attractive” as they say.

In Jadovno camp itself, a mountain meadow surrounded by barbed wire, there were no barracks or beds. The inmates made makeshift fern canopies and beds. In order to drink and eat, they carved small troughs in pieces of wood…

The records of inmates were kept only in the beginning.

Many of those who were sent to Karlobag or island Pag were killed or thrown into karst pits along the way. A part of inmates were sent from the Karlobag road to village Stupinčinovo and Badanj Pit.

The capacity of pits had been carefully calculated even before the war.

Oh my God, where are you taking us?

When trucks with women and children, on their way to the coast, arrived to a spot where you could see the island of Pag, many nervous mothers asked: Oh my God, where are you taking us?

Getting off the trucks and boarding boats in Karlobag was brutal and  accompanied by curses both from Ustashas and the locals.

Many of the prisoners had never reached Pag. They were thrown into the sea with rocks around their necks and their bellies gutted (so that the corpses would not float on the surface).

The surviving women and children were taken to the village of Metajna, and men to the Slana Bay.

In Metajna, the camp for women and children was organised in the villas of Dr. Triplat and Dr. Hvale. From there they were taken outside the village to be killed.

East from Metajna Slana camps had been established, one for Serbs and one for Jews and communists.

In that hell, in that rocky desert, as Professor Mihael Sobolevski calls it in his feuilleton (https://www.jadovno.com/html/pakao-u-kamenoj-pustinji.htm), there is neither vegetation nor shade.

In summer heat and on scorching rocks, the inmates in rocks from rock built a road leading from nowhere to no place just to exhaust them.

They were killed east from the camp, on the nearby Furnaža, a location with enough earth to make shallow graves.

Those who were killed just before the camp was closed were exhumed, burned and had their ashes scattered by Italian soldiers. On that occasion, Lieutenant Dr. Stazzi Santo duly recorded the following:

“Amongst these corpses were: 407 men, 293 women and 91 children from age 5 to 14. Amongst these children was one infant approximately 5 months old. On a different location, south from the wire fence surrounding the Serbian camp, we found another smaller graveyard. Using drills we determined that the corpses were in wooden coffins and buried quite deep, so we did not excavate them.

These were probably inmates who died of natural causes, so their comrades buried them.

From the person who was my prudent guide in finding various locations that we had to fix, I found out that the most of the deportees to Slana was thrown into the see tied to large rocks, and many of them took their own lives by drowning.”

At the end of this short description I will inform you about the tragic numbers.

On the area of the complex of Ustashas Jadovno camps, which was a predecessor of Jasenovac, in 1941 in just 132 days of its existence, 40 123 victims were killed in the cruellest of ways, thrown alive of half alive into karst pits, buried into the Pag rocks and thrown into the Velebit Channel sea. In the incomplete list of victims made by Professor Dr. Đuro Zatezalo there are names of 10502 victims.

If in the area of the Jadovno camp complex you took a photo, ate, swam, dived, cycled, laughed, made love… nobody can hold it against you.

You did not know because it was difficult to find out.

The truth about Jadovno was covered by an imposed silence lasting for many years which almost resulted in our collective amnesia.

Our fathers did not tell us about Jadovno, because it was counterproductive to the brotherhood and unity.

For those who chose not to be silent were faced with punishment.

For the sake of “higher goals”, they agreed that the remains of our ancestors will remain on the bottom of Velebit pits, in the rocky desert of Pag island and on the bottom of the Velebit Channel. You will agree that these places cannot be called tombs!

In search for the location of Jadovno camp in 2010

There must be few people who know the location of Jadovno camp on Velebit.

I asked foresters, county and town officials in Gospić and they said they didn’t know. I visited Prof. Đuro Zatezalo, a man who devoted a large part of his working life investigating Jadovno and who published a two-volume capital work about it as late as 2007.

Although he is a man in his late years with serious health problems, he agreed to visit Velebit.

We invited our hosts from Gospić to join us. They refused saying that the drive would be unsafe and that it would be difficult to find the location of the camp.

One of the persons present asked me when I was leaving: Aren’t you afraid?

Certainly not, I said, both of my grandfathers and an uncle are there?

Uncle Đuro last visited the camp area in 1991. He told us to drive 6.5 kilometres from Šaranova Pit. From that spot leads a path to the camp. When we reached a location from which we were supposed to continue on foot, uncle Đuro got discouraged. Nature went on its course in the last 20 years, and the local forestry company changed the appearance of the location by felling trees. After almost an hour wandering in a thick forest, with some snow still left in the cracks, uncle Đuro, until recently a pessimist, took us deeper and deeper into the forest.

He separated from us and found the location of the camp by himself.

We found him sitting on the destroyed monument and crying.

The vale where the camp was located now bathed in sunshine. We could see well the knolls of mass graves of inmates killed just before the camp was closed.

In order to hide it, someone covered the destroyed monument with rotting trees and branches.  The whole area of the former camp was covered with blue saffron.

We could not hear any birds.

Let’s go back to the title of this story

Could you imagine exclusive news that in 2010 there is a discovery of the location of Jasenovac or camp Auschwitz-Birkenau, Bergen-Belsen, Buchenwald, Dachau, Treblinka…?!

The directed and controlled long silence and extermination of truth welcomed the suppressed awareness of victims’ offspring, for which psychologists say is quite common phenomenon in post-war times.

This imposed silence, almost censorship, looking from this perspective, had unbelievable consequences on our own attitude towards the graves of our people, towards sites where our family members were killed.

Someone took really good care that Jadovno is seldom mentioned, to build the monument far from the forest road, on a location where it would be impossible to find it by an accidental traveller, to prevent people from finding the camp site.

This obvious concealment of the Ustasha crime, its location and character has its clear continuity. During the last war, the victims were killed again, because all Memorial Plaques were broken and monuments destroyed with explosives.

In front of Dachau camp it reads:

“Who wants victims to be forgotten, wants them to repeat”.