DO NOT FORGET VICTIMS OF JADOVNO – SERBS AND JEWS 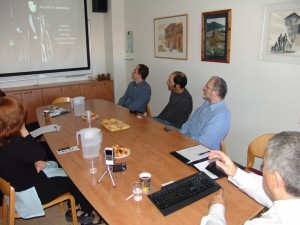 BANJA LUKA, JERUSALEM, DECEMBER 8 /SRNA/ – The President of the Association of Descendants and Supporters of Victims of the Complex of Ustasha Camps “Jadovno 1941”, Dušan Bastašić informed relevant institutions in Israel on the suffering of Jadovno victims, because the Israeli public does not know almost anything about it, although amongst the victims there were a lot of Jews.

“Jadovno is both an execution site of Serbs and Jews. Out of 40,123 victims identified by Dr Đuro Zatezalo there was around five percent of Jews. Among that five percent there were 2000 Jewish youths, intellectual and athletic Jewish elite in Croatia”, Bastašić informed his hosts in Jerusalem.

He said that the whole team of the Jewish Football Club “Maccabi” which in 1941 qualified to the First Royal League, had been the first to be arrested in April and with other 165 Jewish youths taken to ‘Danica’ camp, Gospić camp, a part of them to Jadovno, and a part to Pag Island in ‘Slana’ camps. Out of 165 of them only two survived. One of them was an athlete who had been the European 400-metres champion.

The presentation of the Jadovno execution site in the “Yad Vashem” Museum was attended by staff of Museum’s library, archives and secretariat.

“We presented not only what Jadovno execution site was, but also basic information on the Independent State of Croatia /NDH/, who was not a ‘so-called’ nor a ‘puppet’ state, but a state with its executive, legislative and judicial authority who with its legislation and a series of laws from April to July 1941 basically legalised the crime. I must say that our hosts were ‘surprised’ since they in ‘Yad Vashem’ did not know almost anything about Jadovno prior to our visit”, said Bastašić for Srna.

They also presented parts of testimonies by former inmates, only few of them who managed to survive the camp on Pag. One of them was Emerik Blum, a former Mayor of Sarajevo and long-term Director of “Energoinvest” Company.

“We also showed a video statement by one of few women who survived three weeks in karst pits of Jadovno, where they had been thrown. This video was especially dramatic for our hosts”, says Bastašić.

Besides documentation on the NDH and complex of Ustashas Jadovno camps, they also presented past and future activities of the Association “Jadovno”. Videos from the first marking of the Jadovno Remembrance Day held on June 26 this year at Šaranova Pit and on Pag Island, where camps Slana and Metajna were, were also shown.

He stressed that together with a member of the Association “Jadovno” Danijel Simić, an author from Banja Luka, he visited the “Yad Vashem” Museum and saw an impressive exhibition placed over one thousand square metres, but where there was almost not a single word on Jadovno there, while Jasenovac camp is mentioned only in two or three places with brief and general information.

“It was a great honour for us to lay a wreath of the Association “Jadovno” on the memorial plaque for victims of holocaust and genocide at the Hall of Remembrance. We also laid a wreath on the Jasenovac plaque, which has the name of Jasenovac written in Latin alphabet along with Hebrew”, Bastašić stresses.

To representatives of “Yad Vashem” he handed a DVD with documentation that the Association “Jadovno” collected in the ten months of its work.

“We have agreed to make a cooperation protocol between the ‘Yad Vashem’ Museum and Association ‘Jadovno 1941’ which is going to define way of exchanging documentation and evidence in order to inform the public as much as possible and reveal the truth about this almost forgotten execution site”, said Bastašić.

Bastašić and Simić were also received by Efraim Zuroff, the Director of the “Simon Wiesenthal” Centre, whom they informed on work and activities of the Association “Jadovno”, especially on the attention to organise the first international conference on Jadovno complex of camps in Banja Luka on June 24 next year. Representatives of the “Yad Vashem” Museum were also invited to the conference.

Their second day in Israel started with a visit to the Ghetto Fighters’ House, the first institution in Israel that started dealing with the Holocaust immediately after the Second World War.

“At the Ghetto Fighters’ House we only found one panel, one square metre in size, with sign Yugoslavia where it reads that after April 6 Yugoslavia surrendered after Germans had attacked and that it was divided in April 17, and that after that ‘villages were destroyed and thousands of Partisans were executed’. It is well-known that during 132 days that Jadovno existed there were no Partisans, nor a single shot was fired by any rebel. The victims of Jadovno were important Serbs and Jews, intellectuals and merchants, but most of them ordinary innocent peasants who were brought and executed there just for being Orthodox Serbs or Jews”, says Bastašić.

The activities of the Association “Jadovno” were also presented in this museum and there was an agreement to make a cooperation protocol. Representatives of the museum were also invited to participate in the organisation and events of the conference in Banja Luka next year.

“We were honoured to be received by His Beatitude Patriarch of Jerusalem and Whole of Palestine Theophilos the Third, who was especially interested in the role of the Catholic Church in the organisation and support to the NDH, but also in direct participation in Ustasha crimes. We also talked about the announced visit of Pope Benedict XVI to Croatia in June 2011. The reason for his visit was 50th anniversary of death of Cardinal Alojzije Stepinac, who at the time was at the very top of the pyramid of crime. It is well-known that in the whole hierarchy, members of the Catholic Church participated at all levels in organisation and direct execution of crimes”, said Bastašić.

He said that next year on June 24 in Banja Luka, at the first international conference on Jadovno, he expects participation of historians from Republika Srpska, Serbia, Israel, Croatia, Slovenia and Italy, because Italians had a noble role in Jadovno and closed the camp in August 1941, horrified by Ustasha crimes. Slovenian historians are invited because they have certain experience in studying executions in karst pits.

The plan for the day after the conference is for participants to visit the area of Jadovno camp, where the Remembrance Day for victims of Jadovno would be marked for the second time.

“We have asked His Holiness Serbian Patriarch Irinej to perform a requiem service in Jadovno on 70thanniversary of suffering of the Jadovno victims. During the visit of President of Serbia Boris Tadić, he and Croatian President Ivo Josipović promised that they would join us next year in Jadovno at, God willing, renewed monument, which was destroyed in the last war”, stressed Bastašić.

He says he expects even larger number of descendants and supporters of Jadovno victims to attend.

“It is another step towards revealing the tragedy of Jadovno and efforts not to forget Jadovno, it being not only a responsible attitude towards our ancestors, but we are absolutely certain that it is necessary for this site of execution to enter the permanent memory of our people as an important category of the Serbian national identity, in order to prevent genocide, because we know what has been happening in this area in the last 70 to 100 years. In order to prevent genocide over future generations of our descendants it is important for these sufferings of our people to become the permanent memory”, Bastašić sent the message.

The delegation of the Association “Jadovno 1941” from Banja Luka, invited by the Holocaust Museum “Yad Washem” from Jerusalem, stayed in Israel from November 28 to December 1.

Bastašić and Simić’s host in Jerusalem was Father Jovan Ćulibrk, the Coordinator of the Board of Holy Synod of the Serbian Orthodox Church for Jasenovac, who helped them during their stay and with whom they visited the Holy Sepulchre and other locations in Holy Land.