COMMEMORATION FOR SERBS EXECUTED A CENTURY AGO 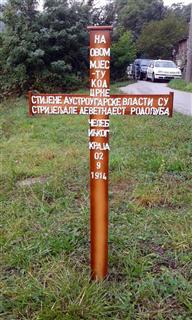 A commemoration was held at the site Crna Stijena near the Foca Hospital on Tuesday to honour 19 Serbs from the Celebic area who were executed by the Austro-Hungarian occupying forces in 1914 today.
On the eve of and at the beginning of the First World War, Austro-Hungarians killed around 200 Serbs in the Foca District, while many ended up in the camps in Arad and Doboj.

Arrested and murdered were renowned residents of Foca, mostly the villagers from the Celebic area, at the border with the then Kingdom of Montenegro.

Only four days after the killing at Crna Stijena, another 52 residents of Celebic were executed on the Siste hill overlooking Foca.

Ljubomir Todovic, a descendant of the victims, says the Austro-Hungarians killed innocent locals, and the people today recount that they were killed “because they took up Montenegrin guns.”

“The people were rounded up in plough fields, in front of their houses, and got killed without any established guilt and without trial,” says Todovic.

This is the first time after 100 years that the commemoration was held, and the place of execution along the road from Foca towards the Hospital is marked with a wooden cross.

“That has finally happened, and it was done at the initiative of the people from Celebic,” Todovic said.

On September 14, 1914, recalls head of the Foca municipality Radisav Masic, 126 Serbs from the Foca District were killed in several sites, while 58 Serb families with 356 members, 170 of them women, were taken to camps.

“Among the 19 killed, who are commemorated today, the youngest one was Simo Bodiroga, who was 22, and the oldest victim was Gligor Jolovic, 86,” says Masic.

He announced that the book by Milenko Miso Todovic “Adresar mrtvih Focana” [The Address Book of the Dead Foca Natives] would be published these days. In it, the author compiled the names of the Serbs killed in the First and Second World Wars, and in the 1990s homeland war.

“The list includes around 2,500 Serbs from Foca, who were killed in those wars,” said Masic.

The book “Adresar mrtvih Focana” will be promoted at the Centre for Culture and Information on the same day at 7.00 pm.