As Serbs living in Britain and elsewhere, perhaps we think we know enough about the genocide that was conducted against our people during WW2 in the Independent State of Croatia. Perhaps we should leave history to the past and instead focus on something positive today rather than dwell on painful memories from 70 years ago. Watch this film, it will change your mind. 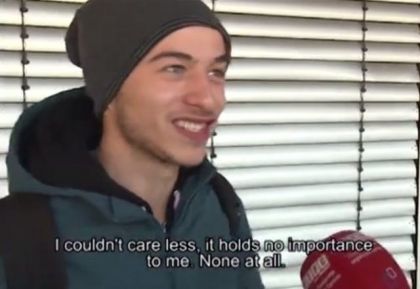 Public service broadcaster for Republika Srpska in Bosnia, RTRS, has transmitted this documentary about modern day attitudes to Jasenovac, the Ustaše extermination camp where more than 700,000 people were slaughtered. Most victims were Serbs but among them a huge number of  Roma, Jews and others.

The programme asks modern day Croatians, including students of Zagreb University a simple question. The answers will astound you – what does Jasenovac mean to you?

– I have a seminar now, I really can’t think about stuff like that, sorry.

– I couldn’t care less, it holds no importance to me. None at all.

Do you know how many people died at Jasenovac?

Which people were mostly killed at Jasenovac?

– It is very well known who died there, Croats died there mostly.

– I think that lots of Communist Croats were killed there, then Roma… and even Serbs.

In the reaction of some Croatian passers by one might perceive a casual malevolence against the victims of Jasenovac. For others, this unreconciled chapter of the nation’s history may simply be too excruciating to speak of and yet for others a more genuine ignorance appears to be exhibited. Programme makers explore how such disturbing ignorance is able to persist in the most recent member state of the European Union. From the holocaust deniers (“Jasenovac was a labour camp with recreational facilities”) whose claims to be serious historians go unchallenged – indeed are supported by – ruling elites to more highly regarded journalists who simply cannot bring themselves to admit the enormity of the genocide perpetrated at Jasenovac death camp.

Today, Jasenovac houses a Memorial Centre where the curator has decided not to show a single picture of its victims. This scant remembrance is contrasted with the Austrian death camp at Mathausen where 120,000 people were slaughtered, among them 7,000 Serbs. This space in Austria observes a complete silence in the crematorium and its exhibits do not shy away from an attempt to portray something of the horror of the atrocities committed within its walls.

Who is to blame?

After the war and up to the present day, Jews around the world have stepped up to the responsibility of ensuring the millions of victims of Nazi genocide are never forgotten and that such hatred should never be allowed to take root again. Programme makers observe the more casual “why rake up the past” approach we Serbs have to remembering our own victims and the scenes of these horrific events.

As Serbs in Britain we have the opportunity to write to our MEPs (click here) and ask, how can this neo-Ustaše renaissance in Croatia go unobserved?

Watch this programme by clicking below:

YOU CAN’T HAVE YOUR RATINGS AND NAME YOUR VICTIMS, TOO

Vladimir Umeljic: Comment on: JASENOVAC IS BEING USED FOR POLITICAL INTERESTS