Raphael Israeli, ISLAM IN THE BALKANS UNDER THE GERMAN OCCUPATION

The Hebrew University of Jerusalem

ISLAM IN THE BALKANS UNDER THE GERMAN OCCUPATION

After the  Nazi occupation of  Poland  and Western Europe in the early stages of WWII, following Hitler’s renouncing of his hope to vanquish Britain, as a result of  America’s entrance into the war, and parallel with the  bogged down Nazi effort on the Russian front  in Stalingrad,  the Nazi strategy shifted from solely relying on their allies in central Europe and the Balkans, to actual occupation of most Mediterranean shores, so as to turn those waters, and the oil resources  around them, into a German lake.

For that purpose, the Nazis sent Rommel to North Africa, planning to oust the British from the Suez and Egypt, cement the Italian position in Libya, assure the rule of Vichy France in North Africa, and guaranteeing the alliance with the Arabs of the Middle East, both via direct contact with the anti-British movements in Egypt and Iraq, and concocting with the Palestinian Mufti, Haj Amin al-Husseini, a detailed plan of extermination of Palestinian Jews. Husseini, a close relative of Yasser Arafat who was later to entertain similar plans, moved to Berlin during the war, met with Hitler and worked relentlessly to turn his satanic dream into reality.

In the Balkans, while some forces, like Tito’s, resisted the Nazis through Partisan guerilla war, others like the Croats, the Hungarians and the Rumanians, directed collaborated with the Nazis and even contributed to the Nazi labor force (similar to France and other occupied lands in Western Europe) and to the Nazi troops, especially in the Russian front. Taking advantage of Muslim presence in the heart of Europe, a relic of the Ottoman occupation, the Mufti recruited an entire Bosnian division to fight for the Germans, and prodded the Croatian allies of the Nazis to hasten their extermination designs against the Serbs and the Jews in the death camp of Jasenovac. 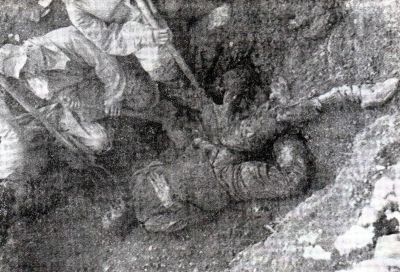