My open letter to FIFA and CAS regarding Simunic case “In the Independent State of Croatia there exists only one greeting: For the Homeland — Ready!”

Yesterday, I read in the Croatian press that Simunic’s lawyer managed to ”prove” to you that “For the Homeland, ready!” was not a fascists greeting.  The attorney was right: the Italian fascist greetings would have been “Viva il Duce!” (Long live the Leader). Simunic had given the Ustasha salute. (http://www.croatiaweek.com/simunic-in-brazil-fifa-give-up-proving-za-dom-spremni-is-fascist-salute/)

The greeting used by Simunic was the only official greeting of the Independent State of Croatia (“NDH”), which was devoted to finalizing a triple genocide during WWII.  indeed, between 1941 and 1945, the NDH succeeded in exterminating several hundred thousands Serbs, Jews and Roma people.  Every order to arrest innocent people and deport them to death camps (that oddly were more cruel than Nazi death camps) ended with “FOR THE HOME — READY!”  You can see it in the document attached to this letter, and hundreds of thousands of similar pages can be seen in archives captured from the Ustashas,.

I would like to draw your attention to  “Visions of Annihilation: The Ustasha regime and the Cultural Politics of Fascism 1941-1945” by Rory Yeomans, senior international research analyst at the International Directorate of the UK Ministry of Justice. The book was published in 2013 by University of Pittsburgh Press.

On pages 258 and 259 Mr. Yeomans deals with the Ustasha greeting: the Ustasha regime wanted to impose new language forms upon the Croatian nation.

I quote Rory Yeomans book: ‘The regime also adopted an agressive language of purification: cultural life was dominated with violent language of “cleansing”, “annihilation”, “blood” and “death” and concepts such as “morality”,”martyrdom”, “sacrifice” and “crucifixion”. Ordinary citizens were expected to live up to the ideals incapsulated in this language, and the regime used the language of threats and punishment, intended to create paranoid symptoms to control social interaction, attitudes, and behavior: masses were there to be commanded, not asked; exclamation marks replaced full stops, aberrant capital letters were everywhere in belligerent public statements.”

This regime introduced its new “revolutionary greeting” — “For the Homeland–Ready!”  In October 1941, strict instructions regarding its use  were issued by Mile Budak, Minister of the the Independent State of Croatia.  Instructions were filed because the regime had noticed that the general public was not accepting the new greeting.

Rory Yeromas shows in his book that the Ustasha regime was very serious in trying to impose this new greeting upon the ordinary people living in the Independent State of Croatia. As ordinary folks were not replacing traditional greetings  with the new Ustasha greeting, such disobedience was frequently exposed in the Ustasha press. Citizens were warned that “In the Independent State of Croatia there exists only one greeting.”  Some, who who did not use this official greeting in their phone conversation had their phones cut off. Teachers that missed to use it in class were denounced in the press. It is clear that use of this greeting was understood as mark of ideological identification with the Ustasha regime. And this is exactly what it means today to Joe Simunic and his fans, who to his “For the Homeland” answered “Ready!”

And what was the ideology of the Ustasha regime? Very similar to that of its protector Nazi Germany.  Even Fascist Italy found it difficult to collaborate with such an ally, and the Italian Army actively intervened to stop Ustasha atrocities.

Simunic desecrated the remembrance of the victims of Ustasha madness.   HIs call “Za Dom!” created fear and horror in survivors and in the descendents of the victims.  People are fearful of an Ustasha ideology revival; they fear that the the Ustashas would find a fertile soil among the masses of young football fans.

I hope you will be able to protect European sports from acts such was that of Simunic–just as the NBA has done in the case of Donald Sterling.

P.S. As attachment 1, I am sending you a photograph of an order to deport 40 Jews to the Ustasha death camp of Jasenovac.  This official document displays the greeting ZA DOM SPREMNI! at its ending line; this is the very same greeting Joe Simunic used in Maksimir stadium in Zagreb.  Thus he identified himself with the Ustasha movement and its “historical achievements”. 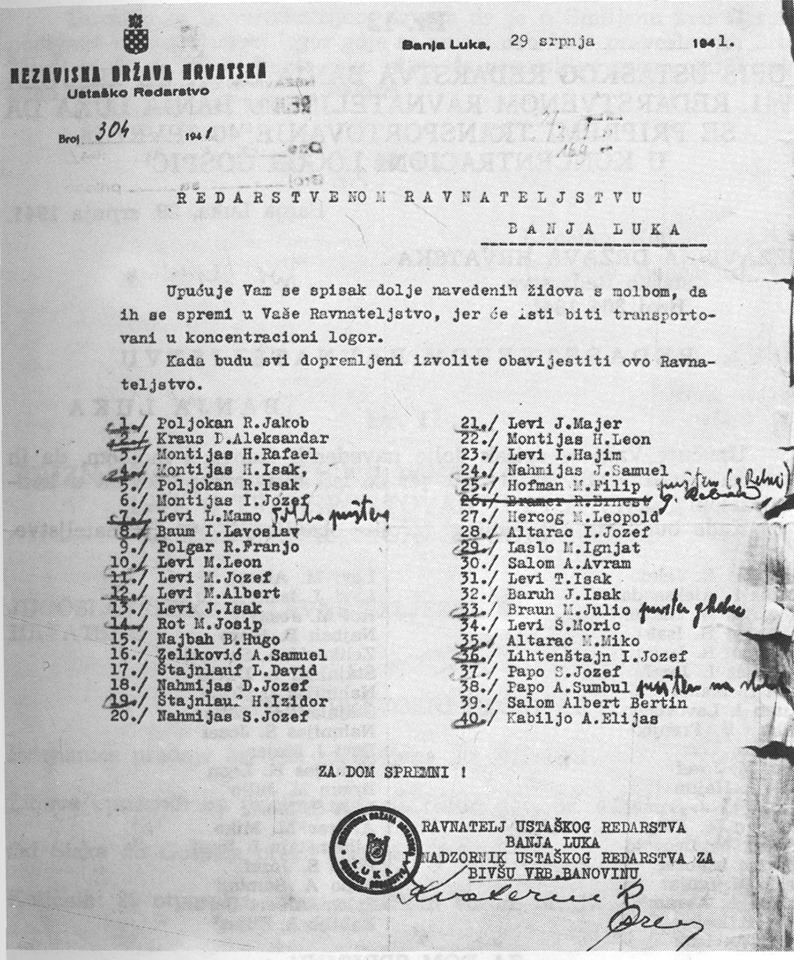 As attachment 2 I present the translation of the above document.(attachment pdf)

Attacment 3 is an Ustasha official order to send undesirable people to the Jasenovac death camp.  According to this document , said camp ”can take in an unlimited number of inmates.”  It shows what Jasenovac was: the only extermination camp in Europe that was not under the control of the SS. 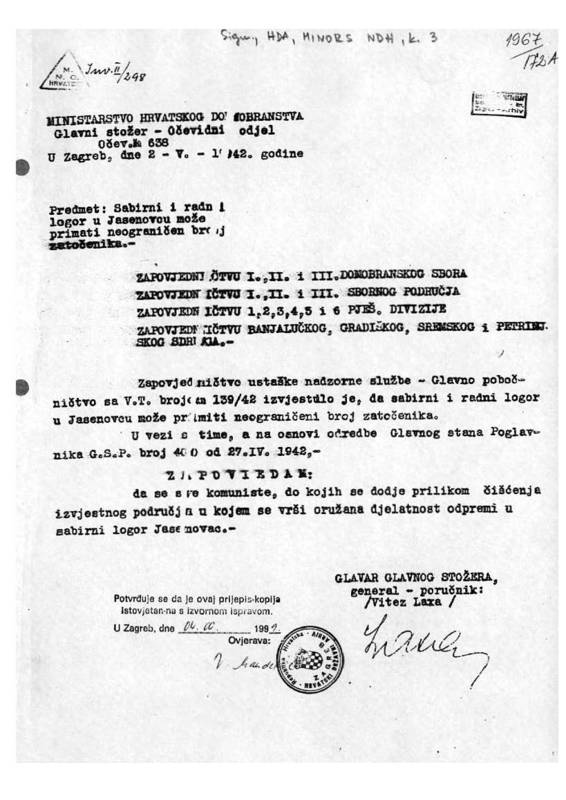