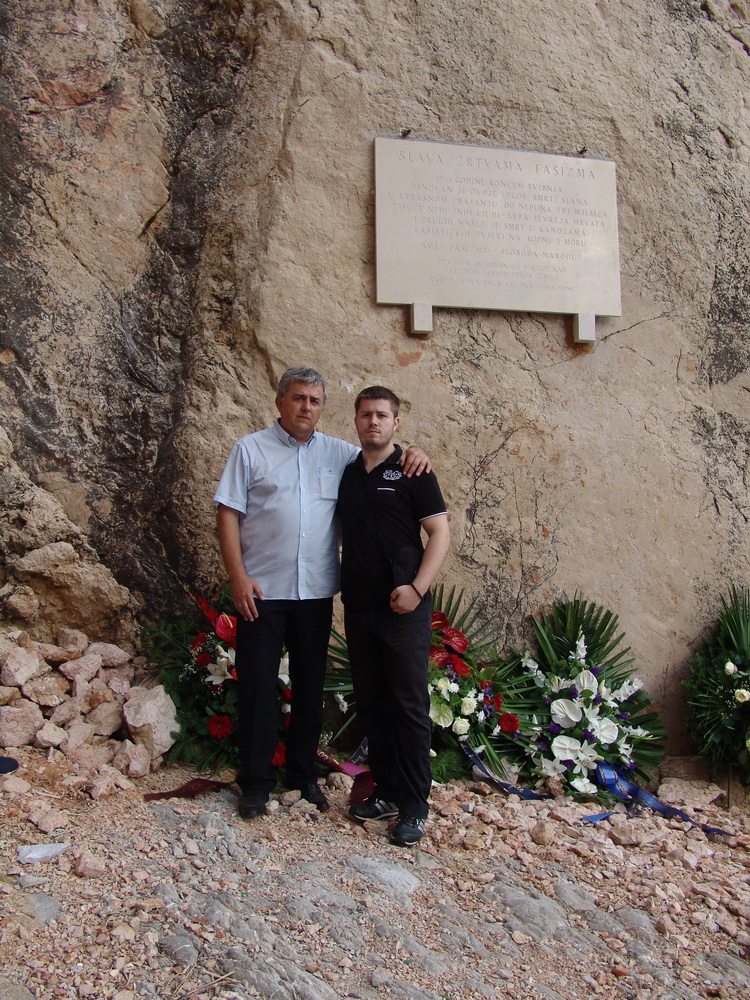 I visited the former Ustasha concentration camp Slana for the first time in 2006. The sun was scorching the earth on that day as it did in 1941. Our people would say „the soil is burning“. There is no soil here; there are only rocks in Slana. The only life existing there is a poisonous plant with green jagged leaves.

Rocks in Slana have sharp edges. It is difficult to walk on them even in shoes. You could still see the remains of stone Ustasha houses and battlements. In unfathomable conditions the inmates with bare hands built these facilities and the road that leads „from nowhere to nowhere“, which is still quite visible. At nigh they were freezing under improvised canopies.

I have read everything about Slana that was available to me.

I remembered the surviving Jewish man who testified how an Ustasha ordered two men to lay down and before shooting them in the head shouted: „Come on, say it ‘who art.. who art…'“.

And also that execution by a firing squad made of still unskilled young Ustashas, when the wounded martyrs screamed Orthodox Christian prayers.

And also the surviving man from Daruvar, Jožo Balaž, who found carvings on a beam in the barracks: „Popović, Popara… Grubišno Polje“.

And also that Ustasha who during his trial said that 1300 Orthodox Christians, who had been transported by ships to the coast and slaughtered in the nearby pits, were mostly from Grubišno Polje and Pakrac.

And also the other one who testified how children before being slaughtered cried: „Gendarme, don’t cut my throat…“

And also the one who testified about a mother with child, whose head was poking out of mother’s belly to which its body had been stitched with wire.

In Slana, you could still see long trenches where Italians, in September 1941, buried the ashes of exhumed and cremated corpses that had been buried in shallow graves. They made a record on the number of corpses: 407 men, 293 women and 91 children age 5 to 14.

Someone took good care that Jadovno and Slana are mentioned very rarely. This obvious cover-up of the location of the Ustasha crime and its character has its continuity.

From 1947 to 1966, the Union of Pag Veterans organised the laying of wreaths on exhumed graves at Furnaža, above Malin, and started collecting money to raise a monument at this crime site. In his book „Charon and Destinies“ (pg.25, Ante Zemljar says that the activity to raise a monument was led by the Veterans Union and that the initial results were good.

„Unfortunately, Zemljar continues, it stopped for several reasons, one of them being financial inability of the Pag community to tackle this project that requires expertise and large finances. We even went forward and asked the public for help, but this attempt failed as it started due to poor response. Under the new leadership of the Fighters Association, led by Nikola Bistričić, we decided not to build a large monument
for the time being, but to at least mark this rocky area with a sign on the top of a rock above the sea in Suha, at the beginning of the Slana camp.“

On September 7, 1975, the people of Pag with the collected funds, on a cliff at the Suha Beach (Paška Slana) raised a memorial plaque reading:

„Glory to the victims of fascism, in 1941 in late May death camp Slana was founded here. In the terrible three months thousands of innocent people: Serbs, Jews, Croats and others found their death on land or sea in the claws of fascist beast. Death to fascism – freedom to the people!

For the 30th anniversary of victory over fascism and liberation of the country PEOPLE OF PAG ISLAND, SEPTEMBER 7, 1975″

Not a word that the crimes were committed by Ustasha criminals…

„For the memorial area of Slana, the Pag Municipal Committee ordered a project
documentation which will include the whole area of the former camps and
gravesites. In 1988 there is already a project to build a road which will go
from the village of Metajna to Slana. It will go parallel to the road built by
the inmates so that it would remain untouched as a monument of that age.“

Not only that besides the plaque (in 1975) nothing else had been done on the registered Slana Memorial Area, but also that plaque was destroyed in the previous war.

Early this year we started the initiative to renew the Memorial Plaque. We received the approval of the Ministry of Culture to place a „replica“ of the plaque, at the same location, with same size and contents.

Permit and special
conditions for the renewal of the Memorial Plaque at the Slana Bay on Pag Island.

I found the text that was on the plaque in Zemljar’s book, which was, by the way, very difficult to find.

The Mayor of Novalja, on whose area Slana is located, was against the text on the plaque explaining that „this was rhetoric out of sync with time“, asking to define „thousands of people“. The co-organisers told me he had agreed later on.

„GLORY TO THE VICTIMS OF FASCISM. IN 1941 (MAY – AUGUST) DEATH CAMP SLANA WAS FOUNDED HERE WHERE A LARGE NUMBER OF INNOCENT PEOPLE DIED WHOM WE HONOUR AND REMEMBER FOREVER.“

New, changed text for the new Memorial Plaque, suggested by the Mayor of Novalja

The picture of the plaque (a blurry scan from newspapers) I managed to find in a barely collected feuilleton „Hell in a Rocky Desert“ from 1985.

It was much more difficult to find the location of the plaque. Nobody knew…

With God’s help, on June 15, after wandering for several hours and just before I was to leave Slana the location revealed itself. In the bay itself I knelt down by the sea to wash my face in that heat. For a long time I pondered whether I would be doing a sacrilege by washing my face with the water that had swallowed so many victims in that place. And again I wondered there „My loved ones, are you there…?“

And I did wash my face, because that water washes the bones of my grandfathers. You know, when you cry in the sea you do not know how many tears you cried.

I moved my look from the sea to the rock and immediately noticed the remains of the support that held the plaque.

June 15, 2010. The discovered location of the removed Memorial Plaque at the east part of the Paška Slana Bay.

They advised us to place the plaque on the same day it was to be unveiled. So we did.

On Saturday, June 26, 2010 we laid a wreath on the blue tomb of the Pag Channel and prayed for the souls of the executed people. Historians say that more people were killed in the sea around the Pag cape St. Christopher then on the Furnaža itself in Slana Camp.

The Memorial Plaque at the location of the Ustasha camp in the Slana Bay placed on June 26, 2010 –
destroyed three days later.

Wreaths were laid under the renewed Memorial Plaque in the Slana Bay. A dirge was held, first one after the summer of 1941. There have never been so many people in this rocky desert.

With my son Luka I laid a wreath for his great grandfather and namesake. My other grandfather Milan and uncle Stevan, 18-year-old at the time, were also murdered at the Jadovno execution site along with other 483 people from Grubišno Polje.

There were no tears. That day was a holiday. We, the descendants of the victims of Jadovno, with our friends together prayed to God to give a peaceful place to the souls of our ancestors.

Yesterday morning they informed that the plaque is no longer there.

Nothing strange, this is a matter of continuity.

It hurts, but pain has been our brother for generations.

Devil’s soldiers while desecrating the symbol of truth probably stepped on the wreaths covered with wax from candles lit on Saturday.

Extirpation of truth is a pointless work. The longer the attempts to hide the truth, the greater the shame of those who do it.

Until the next year on Slana!

May 2006. – The ashes of burned bodies of inmates in
the rocks of Slana -remains of barbed wire