This new, chauvinist storm neither started at the Maksimir Stadium in Zagreb, nor did it reach its apex.

The announcement of this foul weather came from The Hague with the acquittal of the Croatian generals, co-authors and executors of Tuđman and Šušak’s concept of the scorched earth cleansed from the Serbs in Croatia.

Its first wind rushed over Mount Velebit, Croatia in late June, one day before Croatia joined the EU.

In a cloud of dust, a black sedan rushed over the damaged Jadovno road, driving the honorary President of the Croatian anti-fascists so that there, over the gluttonous Šaranova Pit, he could tell the descendants of the victims what was the Independent State of Croatia (NDH) like and what is Jadovno. Neither him, Stipe Mesić, nor his host Milorad Pupovac, did take wax candles into their hands during the memorial service that followed over that very pit. Their example of declared atheists was readily accepted by approximately one hundred followers brought to Velebit so that they would counterbalance the descendants and supporters of victims who travelled from Serbia and Republika Srpska.

They had travelled, but failed to arrive, since they were held, first by Bosnian and then also by Croatian border police, long enough not to arrive to the memorial service.

This was followed by an incident during which Mesić and his brethren were clearly told from the podium what the NDH really is for the descendants of victims and what is the level of collective responsibility of the Croatian people for the crimes committed during its existence.

The man who said that his people had won in 1941 and 1945, this glorious last Keeper of the Seals of our former state, poked the victims’ descendants in the eye by saying in his address that the Jadovno crime was not committed by Croats, but by Ustashas.

Mesić, commended by the Serbian National Council for promoting values of anti-fascism, was happy to receive the applause that followed, quickly realizing that the applause was intended for the youths from Serbia who just then arrived to Jadovno in three buses.

The Croatian officials rushed to their cars, trying to avoid possible reactions from the people and quickly descended from Velebit.

On that day, the former President of Croatia did not go to Pag, where the memorial plaque for 8000 murdered people was renewed for the second time.

Among the victims was almost the complete first team from the Zagreb /Jewish/ football club “Maccabi”, who qualified for the first state league in 1941.

The current President Josipović also did not do it in 2010 when the plaque was renewed for the first time, after being destroyed in the so-called Homeland War, which, according to Josipović, had been just a continuation of the anti-fascist struggle from the Second World War.

Regardless of that, the memorial plaque on Pag was destroyed for the third time, only few days after it had been unveiled, just as the one renewed in 2010.

No, the plaque did not have the epitaph in Cyrillic alphabet. It was written in the Croatian language and in Latin alphabet. Its condemnation was its testimony of the death of “several thousands of innocent people – Serbs, Jews…”.

This was the first flash of the new Ustasha storm.

Several Croatian lower-rank officials “protested” asking culprits to be found and punished, but not asking to renew the plaque. And it was not renewed.

As early as mid-September in Golubić, near Knin, a memorial plaque with a cross and inscription “In the memory of people from Glubić who died in war”, raised by the local residents was destroyed. Although the representatives of Golubić victims, under the pressure of “defenders” associations, accepted the change of the initial memorial plaque bearing names of 34 killed local residents and placed the new plaque with the new text, not even such plaque could survive.

The new storm was gathering strength.

Besides derisive and mocking rhetoric used by the Croatian media while talking about Republika Srpska, they have been increasingly stressing dissatisfaction on the position of the Croatian people in Bosnia and Herzegovina.

At the same time, while speaking about the new government in Serbia, there were more and more texts and TV reports stressing the war history of the leading officials. 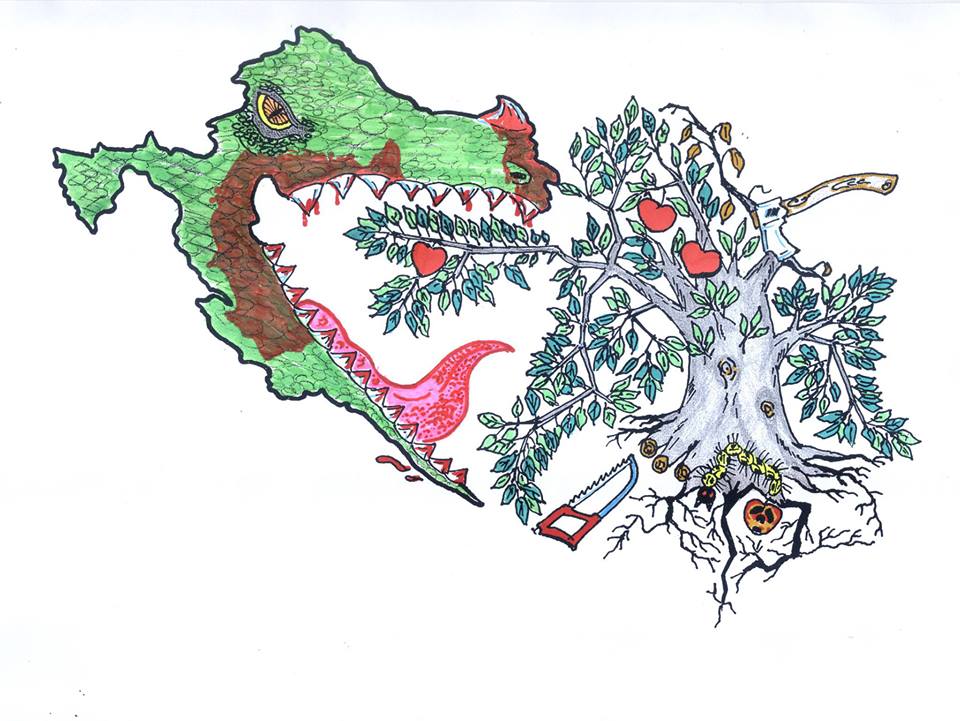 And then, immediately after the alignment changed in the Vukovar Municipality, theystarted breaking the plaques with Cyrillic alphabet and started writing Ustasha graffiti; first in East Slavonia, and then in towns in Banija, Kordun and Lika, where Serbs used their right to put signs in two alphabets.

It seems that such development of the Ustasha storm surprised even the highest Croatian officials, who at the beginning treated these events as individual incidents.

However, the recent event in Vukovar, when the whole of state leadership were prevented to enter the joint column with thousands of followers who arrived from all over Croatia, showed that Croatian authorities were not able to confront the Ustasha storm that started to engulf the whole of Croatia.

Milorad Pupovac, a Member of the Croatian Parliament, President of the Serbian National Council and Vice-President of the SDSS, the largest Serbian political party in Croatia was also in the blocked Vukovar column.

Without doubting the noble intention of the Serbian bard to pay respects to innocent victims, regardless of their ethnicity, we have never witnessed a similar gesture from the Croatian side.

Without attempts to measure the magnitude of suffering with the number of victims, but also rejecting the demagogy that numbers are irrelevant, I pointing out that none of the highest Croatian officials was next to Milorad Pupovac during the recent commemoration in Sisak, Croatia for over 2000 Serbian children who had been killed in the summer of 1942.

Has any Croatian official ever visited Lot 142 at the Mirogoj Cemetary in Zagreb, where bodies of at least 862 children from Kozara were buried?

His such unprincipled and condescending attitude towards the Croatian authorities and the majority people in general is especially insulting for the part of the Serbian people who left Croatia between 1991 and 1995 not wanting to pay the price for staying in Tuđman’s neo-Ustasha creation.

The Ustasha howling at the Maksimir Stadium is nothing else but the expression of collective relief and disburdening at the moment when shackles they wore for several years imposed through the European Union accession process were broken. Imposed by Europe and Croatian authorities.

During that period there was no room for mistake or a wrong move that would slow down and postpone the entry to the new union of peoples.

Not that this goal is achieved and when it is visible that the EU institutions are not reacting to the destruction of monuments for the victims of anti-fascists struggle and civilian victims of war, that they are not paying attention to the breaking of plaques with two alphabets and violation of the Constitutional Law on the rights of minorities – it is time for the cry of freedom.

It is time to show openly what the majority Croatia feels, and how it thinks and acts.

Monuments for the Ustasha ideologists, Dr Ante Starčević, plebiscitary seen as the father of the homeland, are being raised all over Croatia. There is not a single small town without a street or school bearing his name.

The Serbian minority in Croatia, regardless how small, is the thorn in Croatia’s side, regardless of the fact that the highest officials think that such notion is scandalous.

This manifestation of Ustasha ideology, not seen since 1991, will increase the mimicry and speed up already galloping process of croatization and catholicization of the remaining Serbian population, whose younger members are going to melt into the Croatian Roman Catholic corps already in the second generation.

Assimilation of the Serbian into the Croatian biological corps and decreasing the Serbian spiritual area should awake and incite the official Belgrade and Banja Luka to react more harshly and to think about the justification of efforts to return the exiled Serbs to Croatia.

Storms do not recognise state, administrative and entity borders.

This storm could easily turn into a hurricane that could also ravage the area of Republika Srpska and B&H, so much wanted, but never ploughed eastern field.

The crucial question is whether the source of this Ustasha storm really is in Croatia, or the country is just a sail filled by the western winds, from Berlin and Vatican.

Genocide over Serbs in Croatia started with “Swath” in November …

A speech by Dusan Bastasic at Jadovno Concentration camp, on June 26, 2010.