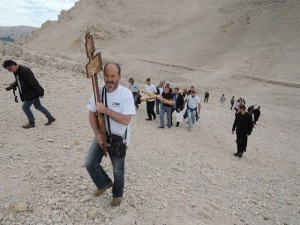 The past weekend I went to Jadovno in order to visit the sites of the Croatian Independant State concentration camps in 1941. to pay respect to the victims who were killed there.

I traveled as part of the group organized by “Jadovno 1941.” organization, which “re-discovered” the sites which made up the complex of concentration camps of Jadovno-Gospić-Pag. When I say “re-discovered” I literally mean just that. The locations and sites where Serbs were taken and executed by Croatian Ustaša, lay “forgotten”. The monuments and plaques, or what’s left of them, marking the places of death lay overgrown in weeds or just left to the elements.

Most of the monuments that marked such sites, were destroyed in the Yugoslav civil war in Croatia 1991-1995. The odd thing is that those monuments marked the sites of genocide which was committed in 1941. But the monuments were only erected as late as 1989!

What is even more shocking is that some of the monuments weren’t even finished. Ever. So they have no markings or any sign stating what it is that they are commemorating. For example at Jadovno, by Šaranova jama, the centerpiece of Jadovno commemoration monument, has a monument with no plaques or signs. None at all. There are clearly holes where the plaques are meant to be placed. But since they were never placed there before the wars of 1990s, they “can’t be added now, because that would mean altering of the monument rather than replacing it”. Or so the law states in Croatia.

From Jadovno, the procession went to the island of Pag. The island held a camp for Jews and Serbs. The traces of the barracks which housed the prisoners and victims can still be seen today. Along with remnants of the barbed wire, nails and rocks. There was a plaque erected close to the site, at Slana, but only in 1975. It “disappeared” during 1990s. Only to be renewed recently. Three times. It kept getting smashed as soon as it got renewed. With no plaque present currently.

While at Pag, we went to Metajna, a village on the island, or more specifically to the local primary school Antun Gustav Matoš, the location of the first concentration camp for women and children in WWII in Europe. On the way to the school, the procession received bewildered looks from the locals. There is no plaque or any signs which would even suggest that there was anything that went on at the school during 1941. The school is freshly painted and serves the local pupils.

The final stop of the procession was Smiljan, the birthplace of Nikola Tesla. In particular we went to Nikola Tesla memorial centre. The centre has a church, in which Nikola’s father served. Behind the church is the house in which Tesla family lived. In front of the church is the graveyard. The only place where you’ll see Smiljan Serbs. But not even in their death are they left in peace. The gravestones are smashed or instead of gravestones you have almost rotten wooden crosses. One massive grave stands apart. I was told that this is a mass grave where the Smiljan Serbs are buried which were killed by Croatian Ustaša in 1941. With half of the victims being Teslas. Family and relatives of Nikola Tesla.

Why do I say “I was told”? Because there is no tombstone or a plaque or any sign at all stating what that mass grave represents.

Just when I was about to leave the graveyard of Smiljan, another visitor and me stumbled upon a human bone, just resting on one of the graves, with no markings. Not even a rotting wooden cross at the head of the grave.

We looked at the bone, dug a hole in the soil on top of the grave and placed the bone inside. We crossed ourselves. Stood there for a few seconds and walked away in silence.