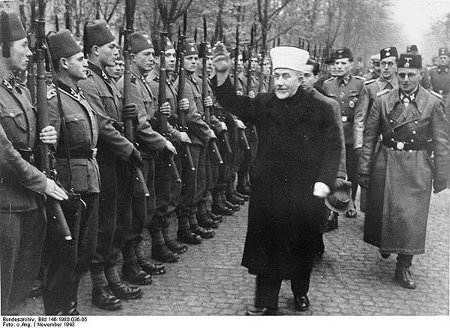 A group of Bosnian-Muslim activists in Canada (the self-styled “Institute for the Research of Genocide”)  issued a press release on March 4 which claims that “facts show that Serbia was the first to use gas vans during the Second World War in Nazi Europe to kill Jewish civilians so that Belgrade and Serbia would be cleared of Jews.” This is the exact factual and moral equivalent of claiming that “facts show that Poland was the first to use gas chambers to kill Jewish civilians so that Warsaw and Poland would be cleared of Jews.” It is curious that such eccentric claims should come from the self-appointed spokesmen for the ethnic group which had provided, proportionate to its numbers, more volunteers for the SS than any other nation in occupied Europe.

Serbia was the first Nazi occupied country to experience reprisals on the scale of one hundred civilians shot for every dead German – the distinction shared only by the regime of terror in the East.  As the authoritative souces point out,  Serbia was under direct German military administration, in contrast to the “Independent State of Croatia” — which included Bosnia and Herzegovina during its brief and ignominious existence — which was the only Quisling regime in occupied Europe authorized by the Nazis to carry out its own “Final Solution.” An integral part of that project, this source reminds us, was the contribution of the Bosnian-Muslim community to the Endlösung:

Hajj Amin al-Husseini, the ex-mufti of Jerusalem, went especially from Berlin to Sarajevo in order to give his blessing to the Bosnian Muslim division named “Handjar” (Sword), which was among the Croatian puppet state’s contributions to the German war machine. This division effectively fought on the eastern front against the Soviet Union, incorporated in the ranks of the Wehrmacht.

The truth exists. Only lies need to be invented. The Bosnian-Muslim “Genocide Institute” – which is headed by a man with well established antisemitic and jihadist connections – is doing a poor job of that self-assigned task.

ISSUES OF IDENTITY — The claim that Bosnian Muslims were “Croats of Islamic faith,” however tenuous, was a key pillar of Pavelić’s Ustaša ideology. It was also a prerequisite of practical politics, as only by asserting those Islamized Slavs’ “purest Croatness” (cviet hrvatskog naroda) could Pavelić lay a viable claim to Bosnia-Herzegovina, in which the Croats accounted for only one-sixth of the population.

Most Bosnian Muslims saw themselves as members of a distinct community, however, and avoided commitment, although some saw themselves as Croats and others as Serbs. It is noteworthy that some of the most important names in the literature of Bosnia-Herzegovina – Osman Djikić, Avdo Karabegović, Mehmed-Meša Selimović, Skender Kulenović, Ćamil Sijarić… – were, as Selimović put it, “of Muslim background, Serbian by nationality.” Many Muslims joined the Ustaše in 1941 and participated in the atrocities against the Serbs, but the majority stayed aloof, especially in the areas with a large Serb population.[1]

The assertion about the “Croatian” character of Bosnian Muslims had never been taken seriously by the Germans, however. As the German Plenipotentiary General in Zagreb, Edmind Glaise von Horstenau, remarked in 1941, “Bosnian Muslims would follow the Croats because they have the power… but at all times they would certainly seek to protect their special Muslim interests. Any assimilation of Muslims by Croats is out of the question, because a Muslim remains a Muslim. Just as he was not really a Serb when he passed himself for one, he will not become a Croat now.[2]

NAZIS ENCOURAGE “BOSNIAK” IDENTITY — On the other hand, increasingly strident attempts by some German quarters to help assert Bosnian-Muslim distinctiveness and to encourage expressions of a separate “Bosniak” identity was tantamount to an attack not only on the ideological foundations of the Ustaša Croatian state (NDH), but also on its practical existence. In 1942-43 Reichsführer SS Heinrich Himmler proceeded to do both. His desire to cultivate Bosnian Muslims as a pillar of the autonomous SS power structure in the Balkans was a typically Himmlerian idiosyncrasy. In the leader of the SS Islam had found its most ardent admirer and promoter in the pre-multicultural Europe. Himmler’s hatred of “soft and Judaizing” Christianity was matched by his admiration for the faith of the Prophet, which he saw as a masculine, martial religion based on the pure SS qualities of blind obedience and readiness for self-sacrifice, untainted by compassion for one’s enemies.

By creating an SS division composed of Bosnian Muslims Himmler hoped to enhance the links between the SS and the Islamic world. He believed that all Islamic nations were potentially sympathetic to Nazism, and that among the Bosnian Muslims this sentiment would be enhanced if Germany accepted and encouraged “Bosniak” particularism. [3] One of his closest aides, Obergruppenführer Gottlob Berger, boasted that “a link is created between Islam and National-Socialism on an open, honest basis. It will be directed in terms of blood and race from the North, and in the ideological-spiritual sphere from the East.”

Himmler recognized in Bosnian Muslims potentially good soldiers who hate “the common Jewish- Bolshevik enemy” and are unreservedly pro-Nazi. His plans had the objective of creating an autonomous and undisputed SS foothold in Bosnia, which he eventually intended to turn into the new SS military frontier.[4]

THE MUFTI HELPS THE REICHSFUEHRER – In his drive to recruit Bosnian Muslims Himmler enlisted the support of Haj Mohammed Amin al-Husseini, the Mufti of Jerusalem and the former President of the Supreme Muslim Council of Palestine, who had been “on the SS leash for a long time,” as Gen. Glaise once remarked. In May 1941, the Mufti declared jihad against Britain, “the greatest foe of Islam,” and made his way to Berlin. When he met Hitler, on November 21, 1941, he declared his readiness to raise support for Germany among the Muslims in the Soviet Union, the Balkans, and the Middle East. He conducted radio propaganda through the network of six stations and set up anti-British espionage and fifth-column networks in the Middle East. The Mufti heaped praise on the Germans because they “know how to get rid of the Jews, and that brings us close to the Germans and sets us in their camp.”[5] He pledged to help solve the Jewish problem in the Muslim lands “in the same way as the Jewish question in the Axis lands is being solved.”

The Muslim spiritual leader visited Bosnia in April 1943 under SS auspices. His visit gave a great boost to Muslim self-assertiveness.[6]Himmler’s ensuing recruitment drive was a resounding success: by the end of 1943 more than twenty thousand young Bosnian Muslims had enlisted in the 13. SS Division, which was given the name Hanjar (Turkish curved sword); the Muslim fez was adopted as its headgear. The total number of Bosnian Muslim volunteers in Himmler’s units, including Kammerhofer’s special police, reached 46,000 by September 1943.[7] This vastly exceeded – by more than two-to-one – the number of Bosnian Muslims with Tito’s Partisans and even prompted some of them to leave the Ustaša for the SS.[8] Proportionate to their numbers, the Muslims of Bosnia were the most ethnusiastic volunteers for Himmler’s SS in the whole of occupied Europe.

THE LEGACY OF THE HANJAR DIVISION – The new division had experienced some problems of insubordination in the early days, when a detachment of its sappers rebelled against mistreatment by German officers at Villefranche de Rouergue in France, where they had been sent for training. Five months later, however, when Himmler inspected the division in Silesia (November 1943), he was pleased with its combat readiness. The creation of an SS state-within-the-state was accompanied by unbridled propaganda favoring Bosnian-Muslim autonomy.

The final extent of Himmler’s plans can be gleaned from a long report on the Quisling Croatia prepared by SS-Brigadefuehrer Ernst Fick, and the views of Standartefuehrer Bayer who was in charge of “ideological education” for the Hanjar division. Recounting the Ustašas’ record – including slaughter of hundreds of thousands of Serbs, lack of discipline and unreliability – Fick concluded that Pavelić’s authority was reduced to that of “the mayor of Zagreb, but without the suburbs.” He suggested that the Ustašas have become a burden and should be disarmed and sent to the Reich as laborers. Bayer, who was in charge of SS indoctrination of Bosnian Muslim novices, suggested that Pavelić was clinically insane.[9]

Himmler’s motives in cultivating Bosnian Muslims were linked to the internal power politics of the Nazi hierarchy. Successful special police and Waffen SS recruitment among them is an example of Himmler’s empire-building. Seven decades later, the heirs of his Kämpfers have found new masters and new sponsors. Plus ça change…

1] Prominent Muslims of Banja Luka sent a petition to two Muslims in Pavelić’s Quisling government (Džafer Kulenović and Hamdija Bešlagić) on November 12, 1941, protesting the treatment of their “Serb neighbors.” In our own time the famous Sarajevo-born film director Emir Kusturica – whose father, Murat, had always declared himself as a Serb – put it thus: “OK, maybe we were Muslim for 250 years, but we were Othodox before that and deep down we were always Serbs, religion cannot change that. We only became Muslims to survive the Turks.” – The Guardian, London, 4 March 2010.