Good Norwegians and Serbs in Norway and all over the world are very pleased that we have stopped attempts to falsify history.

Kristian Kahrs: I am pleased to inform you that we have won a complete victory over Croatian historical revisionists when it comes to Yugoslav partizans in Norwegian concentration camps.Attached you will see the protest written by the Serbian Union in Norway led by Boris Maksimović. The exhibition Thanking the people of Norway has previously been shown in at Falstad in Norway, and now the Croat Gorana Ognjenović planned to have it at the University of Oslo.

A lot of good Norwegians has been involved in this, and Frank Alm Haugen made me aware of this. When Frank wrote me on Jan. 24, I immediately contacted the University of Oslo, Zorica Mitic, a Serbian doctor in Norway and Knut Flovik Thoresen, a Norwegian army officer, author and historian. Knut is an expert on the history of the Yugoslav prisoners of war in Norway, and he is well respected. He knows some people the Serbian Union in Norway, and they formulated a protest to the university. In addition to the collective protest, Frank and Knut have also written their personal letters of protest to the university. I have also had close contact with the Serbian embassy in Oslo, and they have also had their communication with the university.

Originally, Ognjenović had the embassies of BiH and Croatia as official partners in the program, without mentioning Serbs or Serbia at all. This is very strange when we know that 89 percent of the Yugoslav prisoners in Norway during WWII were Serbs. Ognjenović also had a text where she was praising the friendship between Norway, BiH and Croatia, again without mentioning Serbia or Serbs. On Jan. 25, however, the university changed the text and removed these two embassies from the program, together with the text Ognjenović wrote.

Today Marina Tofting, the Director of Communication at the University of Oslo, called me, and she informed me that the exhibition had been moved to November. Here is a translation of what they write on their pages: “The exhibition “Thanking the people of Norway” is moved to November 2013. The University wishes in connection with this theme inviting you to a seminar with academic debate. To achieve a good academic program, we have decided to postpone the opening.”

Frank Alm Haugen
They also removed the name of Gorana Ognjenović from the program, and I am very pleased that the university do not wish to damage their academic credibility by standing behind this exhibition. It is also encouraging to know that it is possible to change the perception of Serbs as villains and war criminals. The key is to use a scientific and academic approach with sensible arguments. However, in doing this, I think it is crucial to try to have as balanced approach as possible, even if we are not neutral.

Here is an automated translation to story written by Ognjenović with responses from me and Zorica. Now the goal is to exclude Gorana Ognjenović  from all future arrangements related to the story of the partizans in Norway. 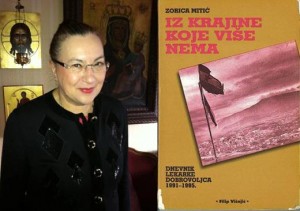