AFTER LONDON “MY JADOVNO” EXHIBITION MOVES TO LEICESTER

The exhibition and lecture “My Jadovno” on Serbian suffering during the time of the Independent State of Croatia, that were opened in London on 1 November, are also going to be presented in Leicester on 16 November, a city with a large Serbian community in Great Britain, said the founder and president of the “Jadovno 1941” association from Banja Luka Dušan Bastašić.

Bastašić stressed that at the exhibition in London, on 17 boards, revealed the truth, mostly to the Serbian community, on the suffering in the complex of death camps Gospić-Jadovno-Pag, but also in Jasenovac, Donja Gradina, in pits of Herzegovina, in Prebilovci, Klepci, in churches in Sadilovac and Glina, on Livanjsko and Glamočko Fields, on Garavice near Bihać, on the island of Pag, Grubišno Field, in Podrinje… 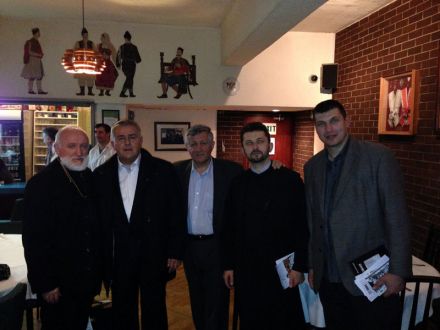 The opening of the exhibition was also attended by priest Radmilo Stokić from Leicester, a sponsor of the Jadovno association Mr Slobodan Simić, priest Dragan Lazić and Boško Zečević, the Secretary of the Serbian Chetnik Movement “Ravna Gora”

“I tried to mention as many places of Serbian suffering during the Pavelić’s regime as possible. Our duty and historical responsibility is to adopt into our permanent memory this part of our martyr family and national history, not only because it is a responsible attitude towards our ancestors who died innocent, but it is also our pledge for a safer future and biological survivor of our descendants”, said Bastašić.

During the My Jadovno lecture, a special attention was given to activities and past results of the association of descendants and supporters of victims, Jadovno 1941 from Banja Luka.

His Excellency the Ambassador of Serbia in Great Britain Mr Ognjen Pribićević with his wife and Rector of the Serbian Orthodox Church in London Goran Spajić viewed the exhibition with much attention, while the lecture and exhibition on Serbian suffering was also attended by Consul of Serbia in this city Ms Ljiljana Zarubica, and academician Srboljub Živanović. Priest Radmilo Stokić and Mr Boško Zečević, the Secretary of the Serbian Chetnik Movement “Ravna Gora” arrived from Leicester to attend the opening of the exhibition.

Bastašić stressed that the exhibition and lecture in London had been organized thanks to the crucial support of the Simić family and members of the Association “Jadovno 1941” in this city.

Jadovno 1941 continues its journey across Great Britain, so already on 16 November the exhibition and lecture “My Jadovno” are going to be held at the Chetnik Movement Home in the city of Leicester.

According to data collected so far, which are not final, in the Ustasha complex of death camps Jadovno-Gospić-Pag at least 40,123 victims were murdered in most brutal ways.

The authors of the exhibition displayed at the Home of Episcope Nikolaj in London are Predrag Lozo, Dragoslav Ilić and Dušan Bastašić.