Zrće beach near a 1941 camp: Croatian Ibiza near crime site

BANJA LUKA – Dušan Bastašić, President of the Citizens Association “Jadovno 1941” from Banja Luka, is bitter because of the attitude of Croatian authorities towards the Second World War execution sites and warns that Zrće beach on the island of Pag, called “Croatian Ibiza” and a place to have fun, is located not far from former camps.

Thousands of tourists from Croatia, Serbia, B&H, Europe and the world visit Zrće every year, however, most of them do not know that on that very island, near the beach, were concentration camps in the Second World War.

“What people don’t know is that Zrće is about eight kilometres from the village of Metajna, where in June 1941 the first camp for Serbian and Jewish women and children in the Second World War was opened, and next to it was camp ‘Slana’, which received its first inmates on 24 June, 1941”, said Bastašić.

He said that on the location of “Slana” camp a memorial plaque was raised in 1975, which was destroyed in 1991.

“We renewed it last year, but it was torn down two days later. On that occasion we had a memorial service which was seen as a finger in the eye to the local authorities who asked for a different text to be written on the plaque, because for them it is probably counterproductive for the development of tourism”, said Bastašić.

He said that this year, at 70th anniversary of the complex of camps “Jadovno”, a visit to Pag was not planned in the commemoration programme and that the Croatian authorities justified it saying they were some outside issues.

“For us, the descendants of the victims, this is pure concealment of the crime by Croatia, and it would be inconvenient for them if we went to Pag, because in order to reach Zrće by sea, you have to sail through the Pag Door”, said Bastašić.

He explained that inmates were taken to the execution sites in boats from Karlobag, through the Pag Door, where no fewer than 8020 inmates were thrown into the sea.

“They were murdered by tying rocks around their necks and cutting open their belles so that they would not float out, and then they were thrown overboard into the sea where people today are partying and swim”, he stated and added that the attitude of the Croatian authorities towards this execution sites is devastating.

Besides the fact there is no plaque there, also there is not a single mark that 70 years ago a camp was there. On Croatian websites you can only see invitations to tourists to have fun on Pag.

“One of them is ‘Come and enjoy the Slana Bay’, then ‘Feel the mystical silence that dominates, disturbed only by cries of seagulls and eagles’, and they invite people to scuba dive and enjoy the depths of the sea off the coast where inmates were thrown in’, said Bastašić and added that there are photographs of people sunbathing on the location where Italians exhumed 793 bodies of inmates, 91 of them children.

He said all of this is happening because tourists and the media do not know about the camps and crimes.

“Imagine building an amusement park or a golf course near ‘Jasenovac’. This thing on Pag is unbelievable hypocrisy”, stressed Bastašić and reiterated that is inconceivable that the Croatian authorities are trying to hide the truth about what happened therein every possible way.

According to the research conducted so far on the complex of Ustasha camps “Jadovno – Gospić 1941”, which also include the island of Pag, no fewer than 40,123 victims were murdered, 38,010 Serbs, 1999 Jews and the rest were ideological opponents of the Independent State of Croatia.

To remind you, this year 70th anniversary of the suffering in “Jadovno” was marked, as well as the “Jadovno” 1941 Remembrance Day, and in Banja Luka, on 24 and 35 June, the First International Conference on the Complex of Ustasha Camps “Jadovno – Gospić” 1941 was held. 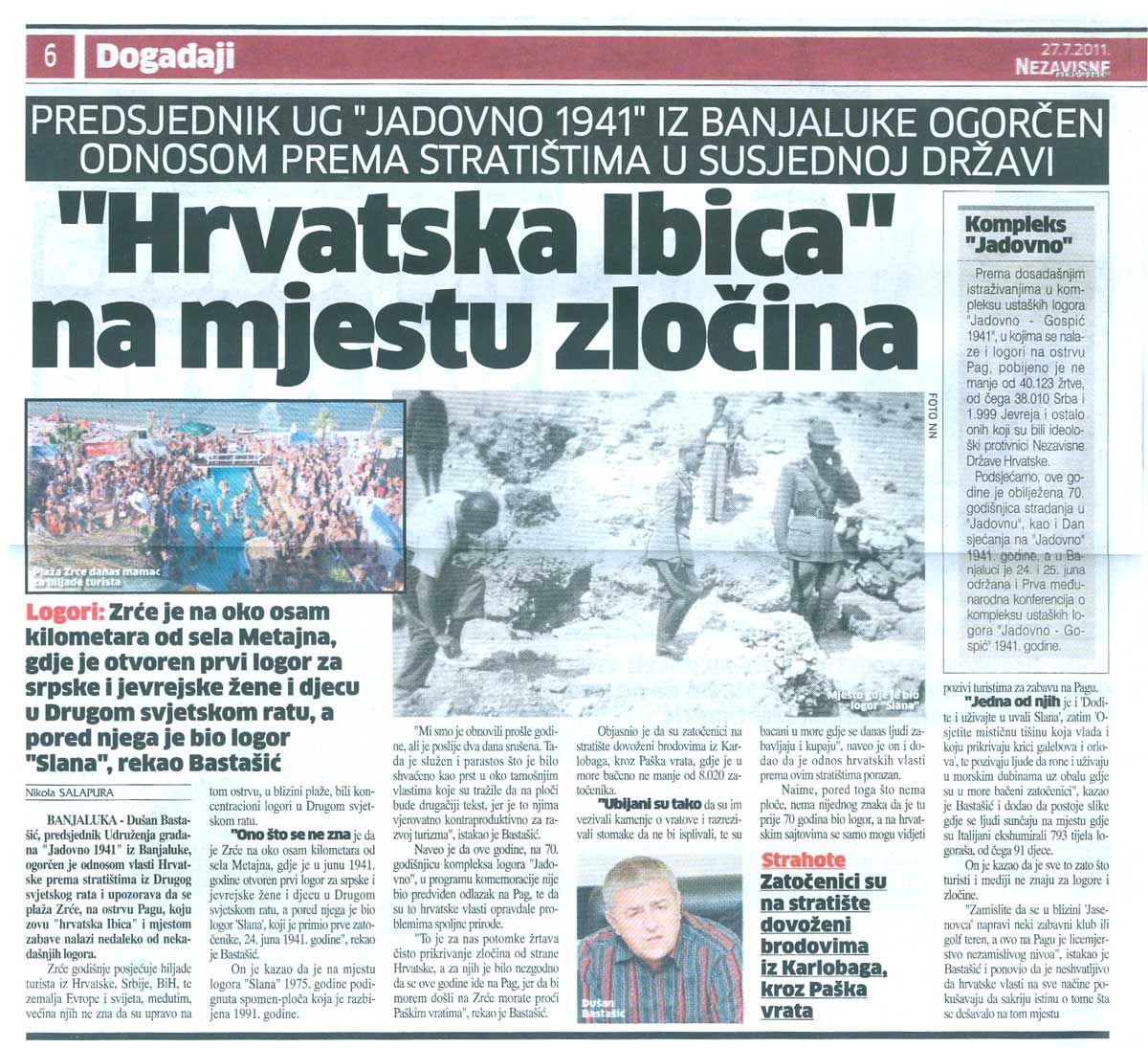