Vladimir Umeljić, SOCIAL-PSYCHOLOGICAL ASPECTS OF THE PHENOMENON OF GENOCIDE (IN THE LIGHT OF THE DEFINITIONISM-THEORY)

The International Commission for the Truth on Jasenovac, Mainaschaff

„Usurpation of the power over definitions with intention to acquire a monopoly over the same, on the part of the centers of political power, embodied in governmental or para-governmental structures is the most efficient instrument of the said centers of political powers, and simultaneously, the engine of both segmentary and total development of the human society. The growth of the political power is, as experience teaches us, directly proportional to the decline in adherence to the ethical imperatives of the human society. Thus the usurpation of power over definitions becomes one of deciding causal and ensuing factors of all deviant social phenomena in the history of mankind.“ (Definitionism-Theory)

The time of genocide is a kind of an extraordinary „state of affairs“ in a social-psychological sense, and a vital component thereof is a state of mind (paradoxical at first sight): The usurpation of power over definitions insists by ways of psychagogy on a redefinition of the planned target group of victims in the sense of their dehumanization, and all with the objective of motivating the planned target group of executors of genocide acts in order to make the execution of criminal and inhuman acts over the  victims easier. The apparent paradox in this all is that only the group of executors is regimental zed (if only temporarily) into dehumanized formation, while the group of victims remain what they were.

Because, statistically, a majority of the perpetrators of a genocide are „normal“ people, and one could hardly be expected a normal person to have a desire to do evil upon his mother, brother, son or spouse. Bringing such a „normal“ person to a point that, during the execution of his own heinously criminal and inhuman act (murder, torture) he does not see his mother or his child, his brother or sister in his helpless victim, implies a high level of success of the psychagogical re/definition of the victims – for the perpetrator the victim is not a human being, and his actions are neither criminal nor sinful.

His actions, as in all great genocides of 20th century, are in congruence (consciously, semi-consciously or subconsciously) with what was acquired „with the cradle“, with history, tradition, ethical-moral criteria in force (or not), social norms and conventions enforce (or not), with everything that we call phonotypical heritage, „human nature“, mentality (= identity) and similar. Later the „peer pressure“ comes on top of it all and consequently, every development of events acquires sooner or later its own dynamics.

Croatian Marija Josipova Obajdin was a normal woman during Serbocide 1941 – 1945. In 1945 she made a court statement: „In summer 1941 I worked as a cook in Slunj (..). I saw them bringing Serbs and putting them in jails, which they were taking over night for killing, after they would rob them. One morning I took a pick and went to dig potatoes. When I got to Lalic forest I saw a woman sitting beside a hole in the ground into which ustashe dumped the bodies of slaughtered Serbs. The woman was stabbed many times and she was bleeding profusely. She was trying to speak but I could not understand anything. I approached her and hit her twice on the head with the pick I had in my hands, after which she fell flat on the ground and did not show any more any signs of life. It was Milka Zec from Zecheva Varosh. Later on I was further digging potatoes…“.

No other form of mass murder in history can compare with genocide in terms of the effectiveness (established in science as linguistic in nature) of the method of „Usurpation of power over definitions and psychagogy“: A massive redefinition of the target group of victims in the sense of their dehumanization results, in turn, in a massive dehumanization of the target group of the executors of the genocide. 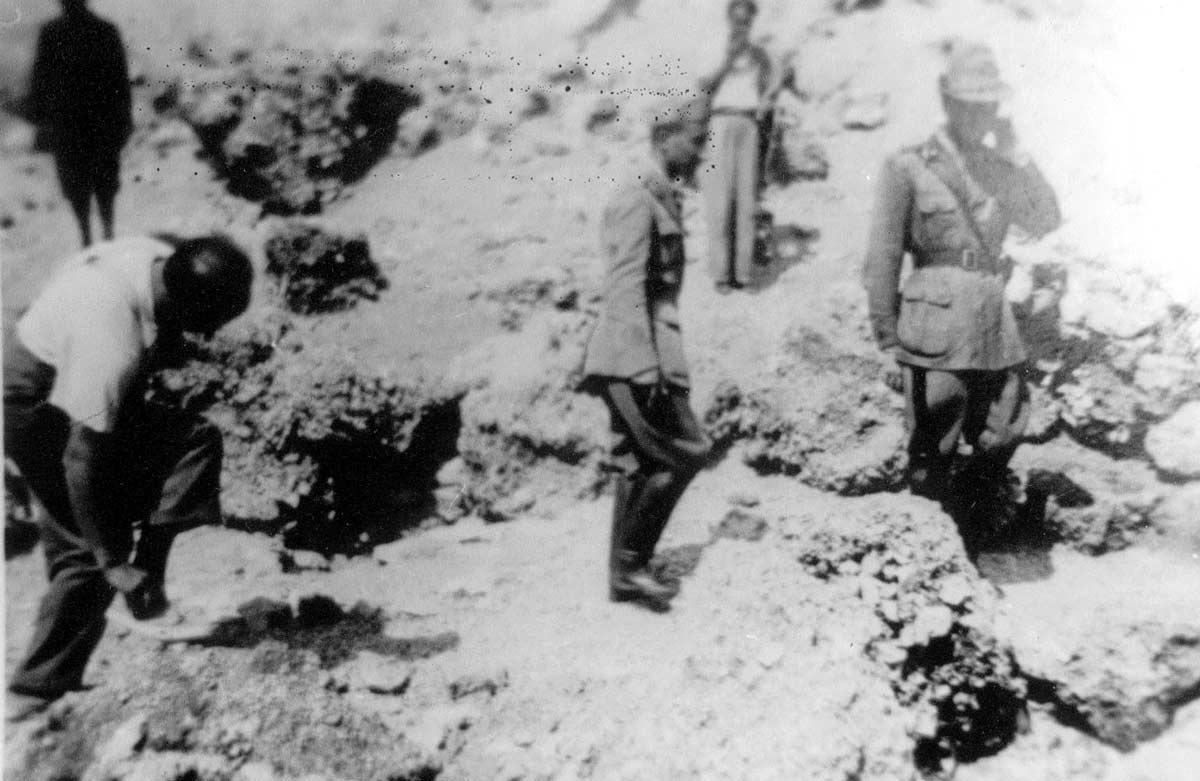