USTASHA SLAIN SERBS IN MASVINA ON THIS DAY IN 1942

The Jadovno 1941 Association reminds that the Ustashas slain more than 420 Serb civilians while fleeing in Masvina forest or in their homes in Kordun, on this day in 1942. 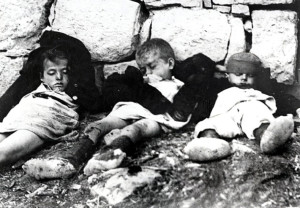 “Who came up with `mrtvo kolo /Dead Kolo/` in Masvina, above Rakovica, Slunj, when on July 21, 1942, the Ustasha slain more than 420 Serb civilians while fleeing their homes or in their own houses; and slaughtered 10 girls and 10 boys aged between five to seven years, then stripped them naked, placed the girls on the back in a circle, tied their hands, spread their legs and placed naked slaughtered boys on them,” asks with pain and disbelief, Djuro Zatezalo in his book “Radio sam svoj seljacki i kovacki posao /I have worked my job of farmer and blacksmith/”.

Testimonies of this event show that the genocide against Serbs in the Independent State of Croatia /NDH/ was a manifestation of primordial evil, difficult to understand and never fully understood.

A testimony of this terrible crime is in the book “Stroj zavicaja – Kordun 1942 /The Machine of Homeland – Kordun 1942/” authored by Milos Gacesa.

The book reads that on July 21, 1942, the commander of the 4th Battalion of the Kordun Detachment, Nikola Basara, with 14 other soldiers, went to visit the battlefield that took place on July 18, 1942 in the village of Masvina.

“In the dawn of July 22, all the villages from Cazin to Rakovica could be seen from Masvina forest. The houses were on fire. Nothing left, just bodies of woman, children and old men were laying next to the burning houses, reads the book.

The forest of Masvina stretches for several kilometers through which the road leads from Brezovac to Ljeskovac in Kordun.

“When we entered the forest we encountered terrible scenes – the corpses of children, women and elderly persons were scattered on both sides up to two kilometers. Small and large livestock were lying killed,” Basara testified.

He says the terrain on this plateau was covered with green grass on which 20 children were lying.

“Out of these 20 children, ten are female and ten are male. There are neither their clothes nor diapers around them. Children are laid in a circle – legs inward, and their heads outwards. The girls were laid on grass with their legs spread and the boys on the top of girls – belly to belly. Every child is slaughtered, but it was obvious they were not slaughtered on the spot,” Basara testified.

He says that no blood marks could be seen, which means that this crime was committed somewhere else, so they brought children and laid them in circle “in kolo”.