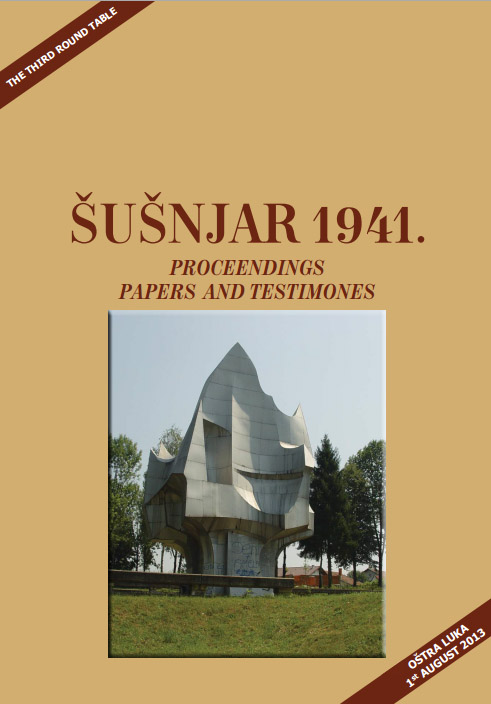 On 1st August 2013, the Third Round Table “Šušnjar 1941” was held in Oštra Luka, with around 45 historians, civil servants and scientists, veterans of the NOR [Narodno-oslobodilački rat, People’s Liberation War], surviving victims, writers, journalists and others. It was organised by the Municipality of Oštra Luka and the Organising Committee consisting of Prof. Vladimir Lukić, PhD, Petar Dodik, Mihajlo Orlović, Ranko Pavlović and Vukašin Davidović. More than 35 testimonies and witness accounts were given on the horrifying slaughter that took place on Saint Elijah’s Day (2nd August) in 1941.At the very beginning, the poet Boro Kapetanović recited verses from his touching poem about Šušnjar, followed by one minute’s silence dedicated to the victims of the Second World War and the deceased participants of the First and Second Round Table.

The following participants were elected working chairpersons: Prof. Vladimir Lukić, PhD, chairman of the Organising Committee; Dragan Stanar, mayor of the Municipality of Oštra Luka; Petar Dodik; Mihajlo Orlović and Ranko Pavlović.The assembly was then addressed by Mayor Dragan Stanar, member of the Organising Committee Mihajlo Orlović, and Prof. Vladimir Lukić, PhD. The convention was blessed by the priest Ilija Milovac.In a remarkable, one could even say solemn atmosphere, sorrowful voices gave out words that were carved into the silence and testified, with the firmness of their arguments and their enormous emotionalcharge, to atrocities we must not forget.
At the end of the Round Table certain conclusions were reached, one of which is that assemblies such as this one are to continue to be held biannually. One of a number of special tasks is that, while there are still living witnesses, we should meticulously record the memories of the victims that came out alive and of those who witnessed the satanic feast of the bloodthirsty Ustashas, as well as of family members of the innocent people who were murdered. It was also concluded that a book of proceedings of testimonies and witness accounts would be published from this round table as well, both in the Serbian and in the English language.The Third Round Table “Šušnjar 1941” was moderated by the writer Ranko Pavlović.On the next day, 2nd August, Saint Elijah’s Day, a memorial service was held at the Šušnjar memorial cemetery.