One of the distinguished business men is the witness that even deportees from Sarajevo came to Slana. For years he never mentioned that he had gone through the hell of this camp, not even to the people close to him. Today he is also deceased. He gave his short statement on his road to Slana on the request of Oren Ružić, a former Partisan from Pag who studied the history of Slana. 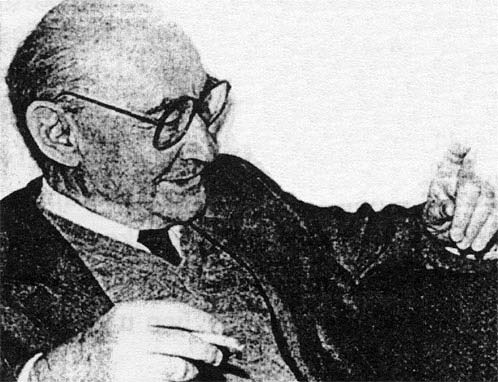 “I was arrested in Sarajevo on June 23, 1941 as a communist. We were held in a prison in Sarajevo for a month. After that we were lined up in columns and sent to the railway station where we boarded a freight train.

After three days we arrived to Gospić. Ustashas divided us into three groups: communists, masons and Zionists. They tied us with chains, two men together and divided into groups…

Five of us (MARCEL, ŠNAJDER; HEINRICH; FERTIG – typesetter, PERO PEŠUT and one young man from SKOJ (Union of Communist Youth of Yugoslavia) – a railway worker, I don’t remember his name and me) said we were Jews. Pero Pešut and I were communists. This decision decided our fate, because at the time communists were dealt with first. Those who said they were communists were immediately separated by Ustashas, and later on we heard that all of them were killed on Velebit and in Jadovno.

The rest of us were taken to Karlobag and then to Pag in trabaccolo ships. At Slana they first took us to the Orthodox camp – a vale the size of a football pitch with several thousands of people. The camp was surrounded by wire and machinegun nests were all around. There were no barracks and people lay on the rocks…

Someone came and asked Jews to come forward. Five of us reported again. They took us to the Jewish camp who was a real Eldorado compared to the other one. We had food there and a place to lie down…

I found out that in the camp were Jews from Croatia, from Zagreb, which were quite well supported by the Jewish Municipality.

In the morning we saw Ustashas taking Pero Pešut and the SKOJ man. They took them to the wire. Then a camp officer also called out Marcel Šnajder, brought him to the other two and took all three of them somewhere. We never saw them again…

There were mostly rich people in the camp and Ustašas wanted to get the most out of them. Even on the trabaccolo, while we were crossing the channel, Ustashas separated men with gold teeth and we never saw them again…

It was especially difficult for the people from the area which today is Titova Korenica. We found out that in the Orthodox camp they killed everybody in the cruellest way. We expected that it would come our turn too. But they again boarded us into trabaccolos and took to Karlobag. In Karlobag many local people came with food, fruit and cigarettes… Then we were put on trucks and transported to Gospić. After three days on the train, three days of terrible life, we arrived to Jasenovac III.

From what I saw there, around thousand Jews went through the Jewish camp on Slana, and I think that there were ten thousand Serbs and us… People came, died and got killed…

I have never seen anyone from the camp on Pag again.

Another human destiny entwined itself amongst many others and we found about it by mere chance as precious information through which we take a peek at one very distant town and lives of inmates from Tuzla who were sent to Koprivnica (to Danica camp) and then disappeared on Pag. In front of me is a photograph of Đorđe Hajvaz, a mining entrepreneur from Tuzla born in 1889 u Bijenja (near Nevesinje, Herzegovina). Next to the photograph lie his letters and post cards to his wife Zora sent to Tuzla (57 Huseina kapetana Gradaščevića Street, which Ustashas changed to Mile Budaka Street).

From a letter written by his son Miladin (Šabac, September 2, 1986) we find out:

“My father Đorđe Hajvaz was arrested by Ustashas immediately after the occupation of Tuzla in 1941. He was put in the Tuzla prison “Štok” together with other 100 hostages who were arrested at the same time. After 7 days in Tuzla, all 100 hostages were transported to Koprivnica by train… In his last letter from Koprivnica he said that one of the 100 hostages from Tuzla, a man by the name of Steva from Zagreb transferred to Belgrade through the German command and that certain doctor Milčić who was in Belgrade at time knew about this, which meant that out of 100 hostages from Tuzla only this Steva remained alive and that he is now in Belgrade. I don’t know if he is still alive, but I am certain that on a poster were 100 names of Serbs from Tuzla who were arrested as hostages…” 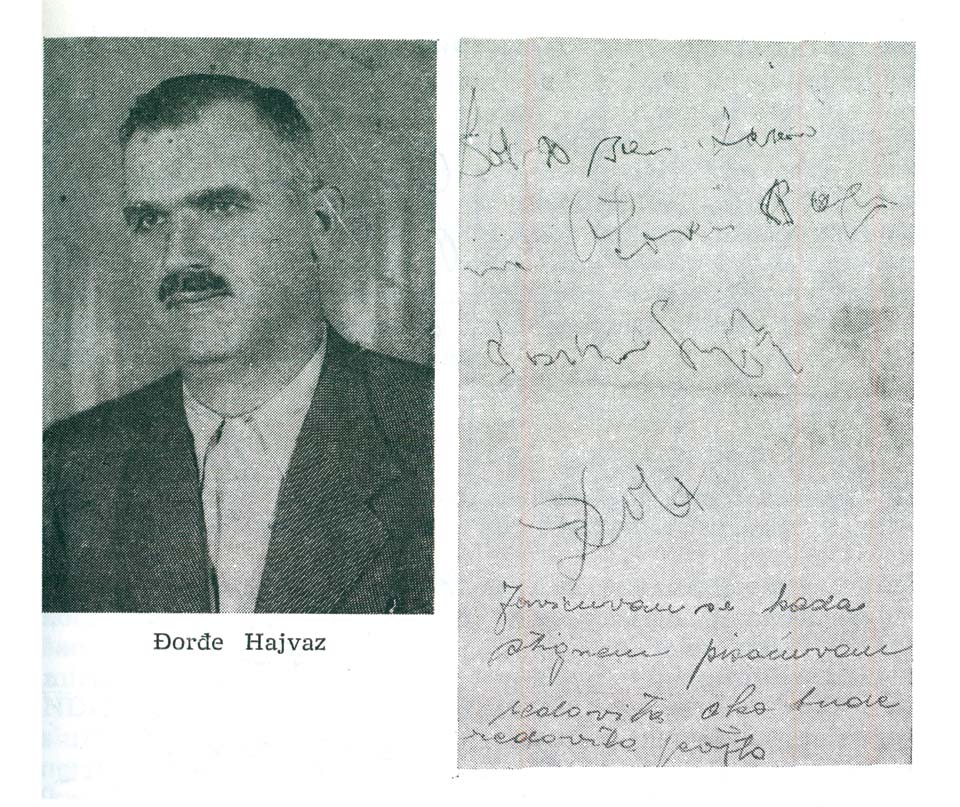 While Đorđe wrote from a hospital in Koprivnica (where he somehow proved that he had high blood pressure and kidney disease, because at first you could get treatment) his handwriting was even and relatively clean and intelligible. The last postcard from Koprivnica is dated July 15, 1941 (and one letter from July 18). In it he said that he would be going back to Danica. Shortly after a letter arrived in which he equally intelligibly writes (him personally or someone else?) that he would be going somewhere else and that he would let them know – because he probably did not know where – but he did not manage to finish that letter or send it, because on the same piece of paper we see added (definitely later) barely clear and urgent message (or writing of a miserable, destroyed man who barely manages to write): “I arrived to Pag Island well, regards to everybody, Đole.” Maybe he wrote it with his hands tied? This letter must have been sent by an Ustasha, probably someone he paid earlier in Danica, who was in his escort and who did him (the last) favour. So, despite everything, Đorđe still had enough strength and skill to send news with the hope he still had. His hope never came true. Not to him, not to the hundred people from Tuzla who left with him and who never came home. Is he lying in a grave amongst rocks in Furnaža, in the Mountain Channel or in pits all over Velebit, it does not matter today, but the accusation still stands! 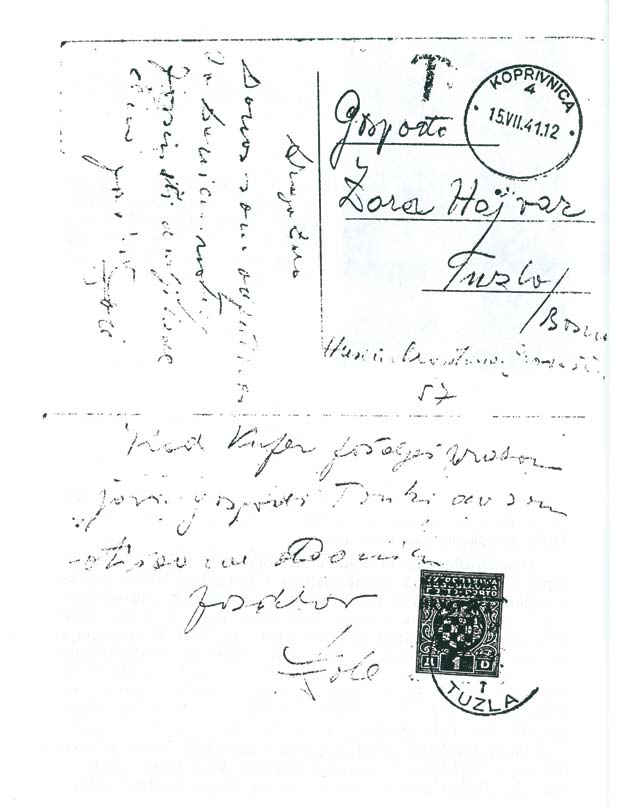 Based on my understanding of the Ustasha concentration camp SLANA on Pag, I would like to make the following (temporary!) conclusion:

The camp practically started on June 24, 1941, when the first groups of inmates were brought there, Jews from the SBOTIČ organisation from Zagreb, then Jewish organisations BNEBRIT and sports organisation MAKABI. Fifteen days later they started to bring in Orthodox Christians, Serbs and other “unsuitable” citizens.

Two camps were formed on SLANA: “Jewish” and “Serbian”. Each camp was surrounded with two rows of wooden posts with barbed wire between them. There is an indication of a third camp, a short-term one, south from the Serbian. Women – both Jewish and Serbian – were placed in houses in village Metajna (not far from Slana). Four Jewish women were first to arrive (wives of inmates in Slana, probably but not confirmed on June 24, 1941, or a few days later).

After them on July 15 came women who had been arrested on July 9 in Zagreb and others who had joined them in Gospić.

To this location on the island Ustashas brought mostly Jews and Serbs from all parts of Croatia, Bosnia and Herzegovina, but mostly from Zagreb and Lika.

The victims were first gathered in Gospić or Jadovno as transit points. From there they were taken to Karlobag mostly on foot. At one point, when the women were moved from Metajna, in mid August, there were still around 600 women and 78 children in Slana.

In SLANA camp there was one barracks (later on two of them) for Jews and three (or two temporary) barracks for Serbs. They were not complete barracks, but just roofs on low drywall as a base.

Due to confined space in the barracks, a large number of inmates slept next to the barracks in the open, on the rocks. The camp (including Metajna) was guarded by 70 to 150 armed Ustashas (8 Ustasha Battalion). The guards were deployed in the watchtowers (5) around the camp (Italians claim there were 7). During works these guards followed work groups. The same ones were executors.

SLANA camp (and Metajna as well) were disbanded (probably) in late August 1941.

From the Jewish (male) camp only five to six inmates lived to be free: two because Germans requested them, one for “mixed” marriage, one for unknown reasons, one by escaping from Jasenovac and one who survived in the famous prison break from Jasenovac out of 20 men who had been moved from SLANA to Jasenovac and killed.

From the Serbian (male) camp we only found one, Hungarian, Josip Balaž.

Out of the women from Metajna camp, 200 of them were returned to the mainland, survived just few, but the exact number was never established. Nobody of the children, it seems so, survived (except for Davorin and Sonja Lukić). All of the graves have not yet been discovered, both on Pag or Velebit. According to graves on Furnaža, in SLANA, on Karlobaška Furnaža, around the camp on the north-west side and to the lighthouse, and according to selected statements and other documents, between 8000 to 13000 men, women and children could have been killed in Slana, in the sea and on Velebit Mountain where they took people from Slana.

All of this was done under two months.

The structures in the camp (barracks, posts, barbed wire, etc.) have disappeared over time. Only structures made of rocks remain, damaged by the elements: a part of the road to Metajna, support walls of the barracks (square shaped), part of the watchtowers, unfinished administration buildings, improvised port with bollards, some drywall next to former buildings, parts of paths leading to the watchtowers, graved spread over the camp, several holes in the rock from the posts and excavated graves on Furnaža. In the Suha Bay, on the southern cliff, there is a memorial plaque.