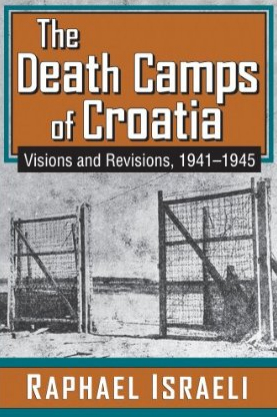 In The Death Camps of Croatia, Raphael Israeli shows that throughout Yugoslavia during World War II, anti-semitism was both deeply rooted and widespread. This book traces the circumstances and the historical context in which the pro-Nazi Ustasha state, encompassing Croatia and Bosnia, erected the death camps of Jadovno and Jasenovac. Israeli distills fact and historical record from accusation and grievance, noting that seventy years later, the gap in research and the collection of data, memoirs, and oral histories has become almost irreparable. This volume meets the challenge, basing its conclusions on evidence from participants from the period.

The battle between the Serbs and the Croats is not likely to be settled any time soon. Both sides have accused the other of the wrongdoings that everyone knows occurred. While the German Nazis, Croat Ustasha, Serbian collaborators, Cetnicks, and Bosnian Hanjar recruits are often seen as the wrongdoers, there were individuals who helped the Jews, hid them at great risk, and enabled them to survive. These people absorbed the Jews in their own ranks, and gave them the means to fight; they were the only people who helped the Jews.

This volume is not about judging one side or the other; it is about acknowledging the evil all sides inflicted upon the Jewish minority in their midst. Serbs, Muslims, and Croats continue to dominate the ex-Yugoslavian scene. It has been their arena of battle for centuries, while the flourishing Jewish minority culture in that area has all but come to a historical standstill and has almost completely vanished. Yet the struggle over the historical record continues.

“The Death Camps of Croatia chronicles the virtually unknown Genocide committed in unspeakable ways by the Ustashi fascists, Catholic priests, and Bosnian Muslims of 700,000 Serbs, Jews, gypsies, and dissident Croatians in the Jadovno and Jasenovac death camps . . . in wartime Yugoslavia in the Nazi-supported Independent state of Greater Croatia. Using recent archival research unveiled at the Jadovno Conference in 2011, the author reveals the catastrophic and grisly testimonies of how these atrocities were committed and the evidence destroyed. It is a masterful and scholarly exposé of the hitherto revisionist history of the Holocaust committed in wartime Yugoslavia.”

“In this intriguing and vivid study, Raphael Israeli delves into the case of genocide in the days of World War II Yugoslavia. The Death Camps of Croatia offers an intricate research strategy to expose and verify the scope of the Nazi-allied Croatian massacre of Serbs, Jews, and gypsies, while the Catholic Church provided religious legitimization for this horrific campaign of mass murder. Israeli traces the steps and connections in this orgy of hatred, flowing from the Balkans to the Middle East, with Islam as a religious catalyst, to destroy the Jews in Croatia, Bosnia, and Serbia. This book discloses a hidden history, exposes the politics of Croatian denial, and seeks through the compelling evidence to launch a move toward admission, confession, and reconciliation among the peoples involved. Here then is a worthy and important scholarly contribution, written in the flowing style of Israeli’s previous books, to the elucidation of evil and destruction in the Nazi era of modern history.”

[Raphael Israeli is professor of Islamic, Chinese, and Middle Eastern history at the Hebrew University. He has authored over thirty books, including Islamikaze, The Iraq War, and Blood Libel and Its Derivatives.

Raphael Israeli, ISLAM IN THE BALKANS UNDER THE GERMAN OCCUPATION