CAMP GOSPIĆ IN CROATIAN NATIONAL AND RACIAL POLICY IN 1941

Favourable political and military circumstance after 27 March and aggression of Germany and its allies on the Kingdom of Yugoslavia enabled the Independent State of Croatia to be created and political programmes of extreme Croatian nationalism to be fulfilled. Although formally it was within Italian sphere of interest, the Ustasha state, with its creation and ideological profile was much closer to German Nazi rather than Italian fascist model. The new state structure was established surprisingly quickly because it was founded on the basis of the civil servants of the Croatian Banovina who, after a public call by Vice President of Yugoslav Government Vlatko Maček, made themselves available to the new ruling elite. A very important role was played the Roman Catholic Church in its support to the new state.

Ideological bases of the Ustasha organisation, first of all its anti-Serbian and anti-Jewish component (based on racist anti-Semitism) immediately became an integral part of the new regime’s policy, which it diligently enforced during all the time the Great Croatian state existed. Oppressive legislation gave a pseudo-legal form for the enforcement of Croatian national and racial policy which essence was to create a homogenous state of Croats, both Roman Catholic and Muslim, by destroying Serbian, Jewish and Romany peoples, as well as politically unwanted citizens, first of all communists and Yugoslav nationalists. During that the process of social excommunication, stigmatisation, expropriation and extermination was somewhat specific for different national and racial groups.

From the first day of the existence of the Ustasha state there were obvious attempts to introduce a system in the destruction process, and the creation of a network of camps was given a priority. In regards to the Serbs, the destruction process started in their ethnic areas, mainly in villages, but from late April, and especially from June 1941 most of executions were conducted systematically and on a mass scale in newly formed death camps with the centre in Gospić. In the network of collection camps from which the road led to Gospić, the most important were camps in Koprivnica and in Zagreb (Grand Fair). The destruction process of Jews (Holocaust) was practically exclusively connected with the newly formed network of camps.

Based on the domicile, gender and age of the victims of camp Gospić, we can confidently claim it was a systematic destruction of Serbian and Jewish people in the whole of NDH. Already then was created a basic model of destruction which worked until the end of the Ustasha state. The system of death camps with its center in Jasenovac would become a perfected and much more elaborate variant of the model which bases were established in the system of death camps based in Gospić from June to August 1941.

In terms of enforcing policies of mass destruction of ethnic, religious, national and race groups within the “new European order” in a camp, camp Gospić takes the lead. The beginning of the “Crusade” of the Nazi Germany and its allies and satellite states against the Soviet Union on 22 June 1941 marked the beginning of mass and systematic killings of Jews on occupied territories, but the death camp system would start working only in late 1941 and early 1942. In other words, the NDH manufacture of death based in Gospić, and from August 1941 in Jasenovac, preceded the industry of death of Nazi Germany with its center in occupied Poland. Already in June 1941, Croatian national and racial policy got very efficient means to achieve its most important goal: physical destruction of Serbian and Jewish people on its territory. 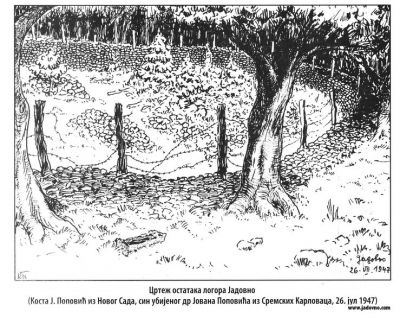