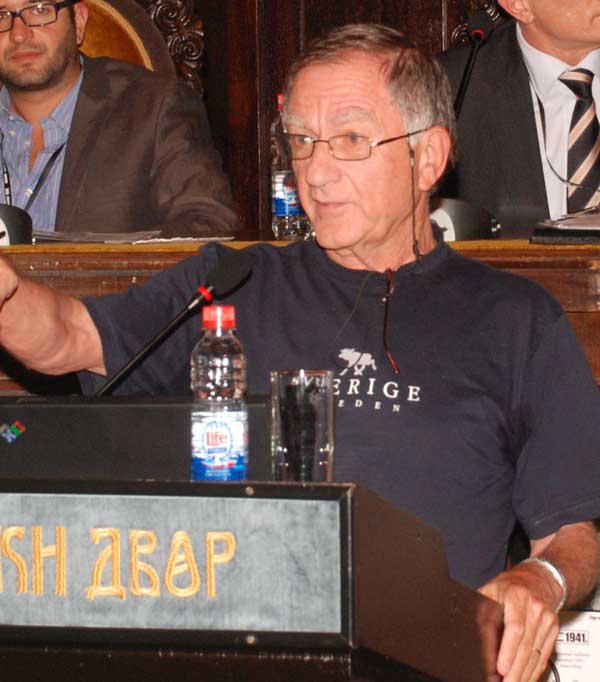 In materials written in the last 20 years about Jasenovac concentration camp there is little history, and too much content used for political interests, stated for Srna Raphael Israeli, a professor from the Truman Institute of the Hebrew University in Jerusalem.

“While researching the material which has been written in the last 20 years on this suffering, I find very little history, and too much mutual, even inappropriate attacks, non-scientific approach, with more politics and everyday political acts, aimed to mobilize certain interests”, assessed Israeli.

Prior to the visit of the Youth Holiday Association of Republika Srpska to the Yad Vashem Museum, he said that one of the obstacles that scientist from Croatia and Serbia, including those from Bosnia and Herzegovina, face every time is the number of camp victims.

“The numbers go from several tens to several hundreds of thousands of victims, so there is a question about terminology, under which term these victims should be, first of all Serbian victims from Jasenovac. In the case of Jews and Romany, the facts are well known”, said Israeli.

He stressed that this ‘playing’ with numbers could pose a question what it means to kill one man, several people, several hundred people, wondering if these numbers are used in order to reach the term genocide.

“Even if Croatian claims are correct that there were several tens of thousands victims of the Jasenovac system of camps, we are in that case also talking about genocide, and lets not start how these numbers are questionable, sometimes pointless, and that this separates us from the very point of scientific research and does not encourage us”, thinks Israeli.

He stressed that we should not let everyday political interests and matters related to someone’s profits get involved into a matter that should remain in the area of science and research.

“I had an opportunity to visit Donja Gradina Memorial Area and Jadovno, and as all normal people I was shocked and overwhelmed with what I saw. What I especially found difficult were the consequences of decades of eradication of traces and notions of death camps”, said Israeli.

“This made me become one of the authors of a scientific research which is going to try and shed light on some aspects of those horrors without getting involved into constant arguments and disagreements between the two sides involved in this subject”, said Israeli.

He said that while studying some materials, he had an opportunity to get familiar with historical facts and prerequisites that preceded the horrors.
Professor Israeli said that a special turning point in his relationship with the Serbs was the last war and NATO bombing of Yugoslavia, which made him feel appalled, especially by the way they were presented in the media.

“That provoked me to publish an article in an Israeli daily newspaper in English, which is very popular, in which I showed the other side and the absurdity of the events”, he said.

Israeli mentioned that he had been in Republika Srpska on several occasions, participating in projects organised by the Academy of Arts and Sciences of Republika Srpska, and in several conferences, such as the one about Jadovno.

President of the Steering Board of the Youth Holiday Association of Republika Srpska Dubravko Suvara said that it is very important that a part of the Yad Vashedm exhibition is dedicated to crimes committed in the former Yugoslavia.

Suvara said that the visit to Yad Vashem should show the Serbs from Republika Srpska which attitude they need to have towards the past and their suffering.
“The way in which the Jews are preserving from oblivion the suffering of their people should be an example for us which attitude to have towards the suffering of Serbs, that is, never to forget the crimes that happened over the Serbian people in the past wars”, said Suvara.

Activists of the Youth Holiday Association also visited the Monastery of St. Sava Consecrated in the Judea Desert, where Serbian St. Sava received a consecrated sceptre after it had twice fallen at his feet.

Serbs managed this monastery for 130 years, and today it belongs to the Greek Orthodox Church. This is a monastery of the Jerusalem Typikon, and therefore only men are allowed to enter.

RAPHAEL ISRAELI Support to Islam is a murder of Christianity