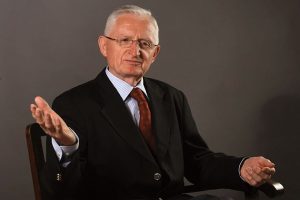 History is a teacher of life, says the old proverb. Hence, it should be regarded as a part of life and future, not only a part of the past.

We recall that the drive for redrawing the borders was one of the key objectives of aggressors in the First World War. The revision of history and results of the First and Second World Wars could prove to be but a front for the revision of borders

The Great War began following the Austro-Hungarian ultimatum, one that everyone clearly knew that Serbia could not have possibly accepted. At the end of that same, 20th century, Serbia (the Federal Republic of Yugoslavia) was given a similar ultimatum by NATO in Rambouillet, also one that obviously could not be accepted. The request contained there in was: either accepting unconditional occupation of the entire country, or having war. NATO aggression against Serbia (the FRY) of 1999 was the turning point in global relations, marking the transition from the relative peace and a sort of observance of the UN system, towards the global interventionism and violation of the basic principles of the international relations. Many intellectuals, including the speakers at this Conference, believe that this has triggered the Third World War.

The post-2008 period is marked by a serious global economic crisis. The military spending in the world is heading to reach two trillion US dollars. Step by step, the world has entered a new spiral of arms race. Are we going to respond to it by launching initiatives and activating mechanisms to put it to an end, or are we, just like on the eve of the World War I, going to let this race throw all of us once again into the chasm of disaster?

A short period of global partnership is being replaced by an increasing global distrust. Is there any readiness to seek just compromises in resolving outstanding problems and revert to general interests of the humanity, as embodied in peace and progress for all peoples and nations?

The narrow circles of the privileged ones are amassing enormous wealth. In a stark contrast, misery, poverty, illnesses, extremism and terrorism are on the rise. How can we possibly seek to develop and spread human and civilization values and rights against the backdrop of such misery, poverty, illnesses, extremism and terrorism? Do we realize the danger entailed by the boiling social discontent? Are we ready to concede that the previously applied methods of combating international terrorism exclusively by military force, have instead been actually powering its further strengthening and dissemination?

The poverty suffered by a major share of human kind is not a mere result of the growing population, but rather an outcome of the increasing iniquity in distribution of assets, within the system that defends the privileges of the rich and prevents development of the poor. The roads to both First and Second World Wars were paved by egotism, denial of equality, and trampling the interest of other nations. The ball is in our court. Shall we continue to speak up and fight for a just international order, or shall we assert that the era of liberal capitalism aggression is not the right moment for such an action? Are we aware that external and forcible imposition of internal systems in target countries, pursuant to the “one-for-all” model, gradually emerges as the foundation of global domination, interventionism, and neo-fascism?

The question at hand is, do we opt for the global domination of “exceptional” ones, or for the multi-polarity and a democratic world order of all equal sovereign nations?

What is left out of the UN’s and the OSCE’s functions of preventive action and peaceful resolution of disputes? Should we, really, consent that the policies of force and of double standards have become legitimate or we should oppose it and struggle for civilization of peace, dignity and freedom for all?

There is growing evidence that we have entered the age of hybrid democracy and ersatz civic values and human rights. Institutions of democratic state became the service of the most powerful corporations possessing military-industrial and financial capital.

Although the institutional formations persevere, an even the new ones are being created in the international domain, the true power is steadily shifting into the narrow and usually informal groups, councils or commissions directly influenced by such military-industrial and financial capital. Issues of war or peace are rarely discussed in parliamentary proceedings; at best, they are being decided in a summary procedure. Democratic public debates on vital issues have definitely become a rarity.

The tangible aspect of militarization is expressed in rapid growth in numbers of foreign bases, especially on the European soil. Presently, Europe hosts more foreign military bases that at the peak of the Cold War. Why? After the USA Military base Bond-steel, erected in Kosovo and Metohija in 1999, there mushroomed four more USA bases in Bulgaria, additional four in Romania, and so on. Pre-1999 existing bases are being upgraded, either by anti-missile shields, or by new facilities for revolving rapid-response task forces. All are creeping closer to the borders of Russia. We are witnessing a new edition of the old, almost forgotten doctrine, “Drang nach Osten”. In parallel, the media, including even in countries of the oldest democratic traditions, are having increasingly less freedom.

Is it possible to maintain THIS unipolar world and privileges by inciting wars, fratricidal conflicts, coups, or colored revolutions?

On the eve of the First World War, it was obvious that certain countries were rapidly arming, and, in parallel, that their appetites for territories and resources were growing. The true meaning of these trends was played down. This illusion was, alas, paid dearly, in millions of human lives. The “September Program”, authored by that-time German Chancellor von Bethmann-Hollweg, dated 9 September 1914, hundred years ago, openly stated German territorial pretensions aimed at neighbors, customs union in the form of an expanded market, and “German colonial Africa”, as considered by Franz Fischer, a prominent German historian. Hollweg’s “September Program” had a clearly invading, expansionist character. Hollweg’s plan triggers various reminiscences, such as this one:

In April 2000, ten months after the end of NATO’s armed aggression against Serbia (the Federal Republic of Yugoslavia), Bratislava hosted a summit of heads of governments and states, and ministers of foreign affairs and of defense of that time candidate states for joining NATO, and senior public officials of the USA. At this Summit, the American representatives presented their plan for rearranging the relations in Europe. Willy Wimmer, Germany’s State Secretary in the Ministry of Defense, and at that time Vice-President of the OSCE Parliamentary Assembly, who was present at the Summit, wrote about this “April Plan”:

“European legal order is an obstacle for implementation of NATO plans. For this purpose is much more convenient to also apply American legal order in Europe. During the expansion (towards the East, added by Z.J.), it is necessary to reinstate the same spatial situation between the Baltic Sea and Anatolia (in Turkey, added by Z.J.), as existed at the heyday of the Roman Empire expansion. This is why Poland has to be encircled from the north and the south by democratic states as neighbors. Romania and Bulgaria have to ensure land connection to Turkey, whereas Serbia has to be permanently excluded from the European development. North of Poland, a complete control over the Sanct Petersburg access to the Baltic Sea must be ensured.” (Published in: Actual Issues of Foreign Policy, the Belgrade Forum for the World of Equals, Belgrade, 2006, pages 73-77).

Almost imperceptibly, the war marketing evolved into a new discipline. It seems that we got accustomed to that “science” very quickly and underestimating the risks. At present, even the non-professionals can easily recognize the pattern of preparing, propagating, and justifying all kinds of aggressions and instigating civil wars. The process comprises these steps: choosing the target; demonizing its legitimate leadership via the media; promises of democracy and fast “better life” that serve to disorientate the public; funding and, as necessary, arming the “pro-democratic” opposition; intensification of destabilizing actions of the NGOs; staging massacres/poisoning by chemical warfare/humanitarian disasters, i.e.: event brands like “Markale” in Sarajevo, “Racak” in Kosovo and Metohija, “Majdan” in Kiev; then follows instigating civil wars or armed aggression; toppling legitimate authorities; installing “pro-democratic” opposition in power; and, finally, assuming the target country’s natural and economic resources by the corporations and even by individuals from administrations of the aggressor countries by the so-called transition, also known as the predatory privatizations.

One of disturbing contemporary phenomena is a very extensive interpretation of the notion of national interests. The USA was the first to appropriate the right to proclaim its national interests in practical terms, in any corner of the Planet, and to defend them by armed force. European partners followed suite. Particular attention provoke statements of Joachim Gauck, President of Germany, that Germany must be ready to defend its national interests abroad by force, if needed. State sovereignty over its natural resources is derogated. Brzezinski and Albright openly claim that natural resources in Siberia cannot belong to Russia only, but rather to the so-called international community! The claims for redistribution of natural wealth of the planet are clearly articulated. Here, one may recall the consequences the humanity suffered owing to German ambitions for redistribution of colonies in the run-up to the World War I.

Back in 1914, that-time aggressors solely relied on brute force. Austro-Hungary sought to halt its declining power and decreasing control over other nations’ territories, whereas Germany wanted to effect its burgeoning economic and military might by invading neighbors’ territories, and by imposing its control over the Berlin-Bagdad route and, eventually, over the entire Europe and Africa. The lessons from World War I show that reliance on force exclusively, coupled with arrogance and disregard for the rights and interests of other nations are not advantage but rather a major weakness.

Another great danger for the contemporary world stems from the presence of power centers which believe they are destined to govern the word, and entrusted with this mission by providence. They hold anyone else in the planet to be handicapped and obliged to do as told and obey directives of the “exceptional” ones. Such centers do not recognize profound changes bringing new distribution of global power. They apply the logic of uni-polar world order not recognizing that this concept is gone and that the history cannot be stopped.

Therefore, having regard to the lessons of history, we may conclude, that it is not the time to seek privileges and domination by force; it is in the interest of humanity to accommodate to the new multi-polar reality, to accept righteous compromises and work for peace.

Writes: Zivadin Jovanovic, president of the Belgrade Forum for a World of Equals