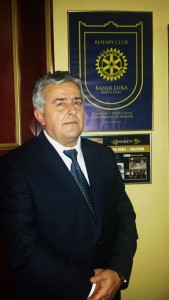 In the Šaranova Pit on Velebit ended the life of the founder and the last President of the old Rotary Club, Spiridon Špiro Bocarić.

The guest at the meeting of Banja Luka Rotary Club on Tuesday, 8 April, 2014, was Dr Dušan Bastašić, the President of the Association “Jadovno 1941”.

In a very interesting speech, Dr Bastašić presented basic data on the association, its results so far in presenting the truth on the suffering of over 40,000 souls in the Jadovno tragedy.

They were Serbs (95%) and Jews (around 5%), civilians, women, children, priests, who were cruelly murdered in just few months of 1941 by Ustashas of Pavelić’s NDH, usually thrown in one of the many pits around Gospić.

Dr Bastašić’s presentation caused much interest and many questions amongst Rotarians, and a joint desire to support the work of Dr Bastašić and his associates in further research, especially in developing the culture of memory.

It is especially interesting to mention, that in the Šaranova Pit also died the founder and the last President of the old Rotary Club, Spiridon Špiro Bocarić. We established that also on the Association’s website www.jadovno.com, i.e. in the List of Victims’ Names which reads that Bocarić, (son of Angel) Špiro, age 63, academic painter from Banja Luka, was arrested on 12 July and taken to Gospić, then thrown into the Šaranova Pit on 19 July, 1941.