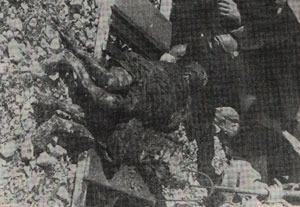 The crime is even more terrifying because of the fact that it was committed in years after the war had ended, in modern terminology known as “ethnic cleansing”, and the result was “disappearance” of several dozens of Italian civilians which was followed by an exodus of 350,000 Italians, who had until then lived there for centuries. The title of the book is “Yugoslav Treatment of Italians after September 8, 1943” and the publisher is Palladino Editore.

The victors, the defeated and the conspiracy of silence

IItaly did not greet them warmly. There was a height of antagonism between the defeated and the victors – Italian communists who organized themselves into “resistance movements” after the capitulation on September 8, 1943 and joined their former enemies, the Americans and English. The defeated were everybody else: non-communists, fascists, those who did not accept the unconditional capitulation or those who simply could not or did not want to reject their ideals and their oaths for King and Country over night. In Italy there was a foray of Partisan courts martial, the civil war was raging, so it was not surprising that the communist authorities in Bologna forbade a train with hungry and thirsty refugees to stop at the station. It just rushed by a platform filled with shocked people who had gathered there spontaneously to help their fellow Italians.

This detail has an eerie resemblance to the summer of 1995 when Serbia kept its borders with Croatia closed for several days, the borders massing with Serbs fleeing Croatian bombs and knives. I remember that scorching summer, crying children and their mothers stacked on tractor trailers or sitting in fields next to ripe maize, next to a road, in front of a closed border with Serbia.

However, the Italians have finally won their truth, at least on paper. They established a holiday, a Remembrance Day, to pay respects to all victims of war, those “righteous” communists ones and those “wrong” ones  – in other words: defeated, those who had lost the war. So the testimonies on events, suffering, evil deeds and crimes slowly come to light. The official authorities claim that “nobody knew”. Documents and correspondence of the members of the government clearly refute it. Just as this book refute it, printed and published in 1947 as ordered by Giulio Andeotti with funds of the Ministry of Interior, only to be covered up by the conspiracy of silence. It was ordered and signed personally by Palmiro Togliatti with his pen in famous green ink. They knew, oh how they knew, and not only about the crimes over Italians.
Ustasha crimes over Serbs – the first ethnic cleansing in Europe
So the book was presented again on February 14, 2011, this time to Italy and the world, so that nobody would forget. It was official, in Rome, in the Senate of the Republic, in a room filled with people, the media, and TV crews. Even the head of a group of senators of the ruling party was at the lectern, long-time minister Maurizio Gasparr. But everybody was waiting for the speech of Senator Aimone Finestra, a direct participant of the events in question who is remembered by many Canadian Serbs as a speaker at the 51st Serbian Day in 1996. He is a former volunteer, Bersaiglieri, who never and under no costs broke the oath to the King, a man who takes the greatest pride in his battles together with Chetniks against communists in the forests of Velebit. This is exactly what he wanted to be written next to his name on the invitation: former mayor and Chetnik commander in Lika and Dalmatia.

For the first time, loud and clear, right in the Italian Parliament, it was said and recorded in all the media, that the first ethnic cleansing in Europe was committed over Serbs in Croatia. Aimone Finestra started his speech with those very words, describing the arrival of Italian troops in Gračac where they had been shocked to find mass graves, shallow graves of murdered Serbian civilians, everybody with no difference, young and old, women and children. Italians spontaneously took their side and already the next evening in Gračac they parked their armoured vehicle in front of the Ustasha barracks and occupied it with their barrels pointing and liberated imprisoned Serbian women and girls. Finestra testifies on battles between Chetniks and Partisans in which he himself participated. With words of admiration he talks about Duke Đujić, Obrad Bjanko, Vladimir Korolija, but also his friends and fellow combatants in the fight against communists, nationalists Bjelanović brothers, Andrija Berić, Milorad Gaćeša, whom he met and embraced again after 53 years in Niagara, and also talks about the terrible Partisan crime over Chetnik Vukašin Masnikosa. He remembers how in 1943, while saying goodbyes in Zadar, he gave his submachine gun to Bjelanović and his Berretta to Berić. Both of them managed to connect with Đujić’s troops. Finestra testifies about another truth that exposed Italian civilians after the capitulation of Italy to unrestrained wrath of not only communists, but Ustashas as well. During the Italian occupation, Ustashas were forbidden to bear arms in the Italian territory. The Ustashas, who even without that ban hated the Italians, and who thought of Dalmatia and Istria to be their land, the Ustashas from whom Italians stole Serbs right under their knives.

This is not confirmed only by Finestra’s words. The last 20 pages of the book are original photographs. The first 10 pages document Italian victims of pits on Velebit, in Istria and Dalmatia. The last 10 are silent testimonies of Serbian victims, half-slaughtered Serbian children ripped out of Ustasha claws, wounded men and women pulled out of pits. There are also five invaluable historical photographs, the only documents on the existence and horrors of the Ustasha camp on the island of Pag, a camp which was a part of the Jadovno complex in which over 40,000 Serbs and Jews were murdered in just 132 days. Italians ordered the camp to be closed the minute they took over the authority, shocked by the crime which – I quote Finestra’s word on the horrors of the Ustasha terror over Serbs in Lika – “the human mind could not imagine”. Not only did Italian military authorities order the Ustasha camps to be closed, but Italians also take the credit for documenting the crimes. Without documents, without material evidence, the conspiracy of silence which so far covered up the unheard of ethnic cleansing and genocide over Serbs in Croatia would leave it as something that does not exist, almost as if it is a fabrication made up by the Serbs. Without people like Finestra and without evidence, the pits would with their depth of silence definitely shut down the last scream and death agony of the murdered Serbs, and the Dalmatian sea would wash their bones off. On Pag, Italian soldiers documented the Ustasha crime with two films with 36 photographs each. Just few of them were in possession of Serbs, descendants of the Jadovno victims. This book publishes another four!

The photographs in the book not only document Ustasha crimes over Serbs. There is also evidence of crimes committed by Partisans over whole Serbian families, guilty for being Chetnik, loyal to the King and Serbia, which was enough to be killed on site. The photographs show the murdered people in their homes, at sleep, lying on a kitchen floor and a child age 8-9 wounded but surviving…

Are the Serbs ever going to find strength to establish a Reconciliation Day in Serbia and tell each other what really happened? Finestra claims that in 1941 there was an attack first on the identity of Serbs and then Italians. How else could we explain 54 allied bombings of Zadar from September to December 1943, a town with only 500 soldiers? – he wonders. “We fought until the end. We paid that fight dearly.” – says Finestra and demands the truth about the past. Without past there is no present, nor future. The truth about the past is definitely missed by the younger generations of Serbs as well, wherever they might be. Why are they denied this part of their own history?